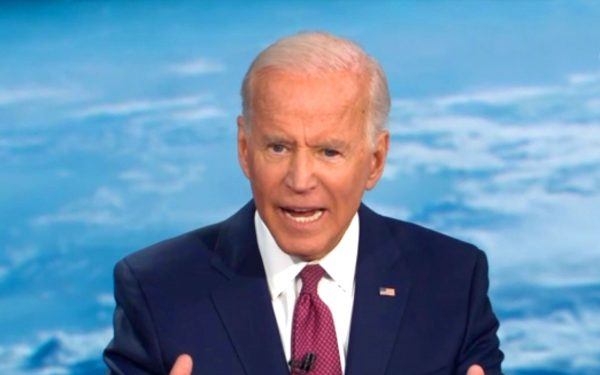 The Dems are desperate for 2020 candidates [1] — but what’s been happening to former Vice President Joe Biden is getting sadder and more disturbing by the day, in my opinion.

While some of the Biden mistakes, gaffes and missteps can make people chuckle, it’s getting to the point now where this is not funny.

In one instance when speaking to a reporter in Iowa, Biden talked as if he were still the vice president and Barack Obama were still president.

That’s not a gaffe.

And that’s not “normal.”

Is it the stress of campaigning?

Is something else going on?

This latest story of two days ago is probably one of the most strangest yet.

By all accounts, it looked as if Biden were confused and lost track of where the crowd was or the camera was located.

For roughly 18 long seconds, Biden spoke directly to a gigantic screen on the stage.

HILARIOUS…
Joe Biden speaking in an arena in Iowa gets confused where the camera is and keeps talking to a screen. CSPAN keeps cutting away to try and help him out…hahahahahahaha @realDonaldTrump [3] @DonaldJTrumpJr [4] pic.twitter.com/nF9pFV0TE1 [5]

At the start of the speech, Biden came trotting out in an awkward “Look, everyone, I can run” moment.

And during the speech, Biden was walking in circles while speaking to the crowd.

Related: Biden Is Either Misremembering Recent History — or Lying [7]

Perhaps that’s what threw him off — and left him talking to a screen for about 18-plus seconds.

Below is a clip of him “running” and going in “circles.”

"[Trump] is a man who started his campaign based on hate and division."

A version of this piece originally appeared in WayneDupree.com; [11] this article is used by permission.