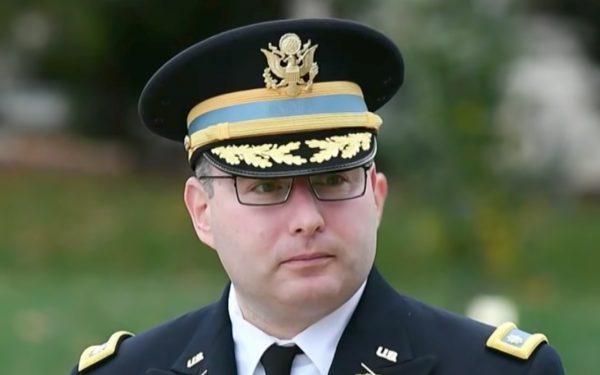 While Jennifer Williams, an aide to Vice President Mike Pence, held her own during the Tuesday impeachment inquiry hearings, Army Lt. Colonel Alexander Vindman (shown above) of the National Security Council fell apart during cross-examination by the ranking member of the House Intelligence Committee, Rep. Devin Nunes (R-Calif.).

Related: If Trump Testifies to Committee, Watch Out [1]

Nunes countered by hitting the leftwing media on the disparity between the reality of the inquiry and their coverage.

He recited his resume and background to try to wrap himself in the American flag and recount what would have happened to an army officer in his native Russia if that officer became political.

Then, after decrying that potential of politicization of the military, what does he do?

He gives an amazingly partisan testimony taken from Dem talking points that put him in the center of a highly political presidential impeachment controversy.

This country has a history and tradition of a non-partisan military above the political fray.

Related: Impeachment ‘Is Not the Soap Opera Americans Want to Watch’ [2]

It’s lucky for him, but not so much for Dems on the committee, that most people are going about their duties of everyday life and consider this entire charade nothing more than inside baseball in D.C.

He finished with a lachrymose reference to his family to further attempt to make himself seem like an innocent family man, not a politically motivated military officer who is gambling on an upcoming Democrat administration to get his reward for his Tuesday performance.

When Vindman came under cross-examination, he came undone.

More than once — more than several times — Vindman responded to questioning by Nunes with the phrases, “Not entirely clear at that moment” and “Not aware.”

That happened so much that Nunes then pointed out that Vindman was using the Fifth Amendment to protect himself from self-incrimination.

The farce went on to play the game that has been a sport on the committee for days: Let’s Not Name the CIA Informant — even though all of D.C. and America knows who the individual is at this point, as numerous publications, not to mention all of social media, have revealed his name.

Chairman Schiff still is determined, though, to pretend to protect a secret that was outed weeks ago. He continues this game to shield the CIA informant from any scrutiny because Schiff knows full well the charges made by the Obama holdover will not stand up to investigation in the light of day.

When Schiff had to intervene once more to do protect the informant from outing, Vindman’s counsel told Nunes the witness could not answer because of “instructions from the chairman” of the committee.

Strangely, after consistently speaking of Giuliani’s alleged nefarious actions in regard to Ukraine, Vindman then called him “New York’s finest mayor.”

Apparently, the light colonel thinks the former mayor should have stayed in Manhattan.

With that, he had little else to say to Nunes and finished his testimony.

After a break, individual members of the committee got their chance to question the witnesses.

More coverage of these hearings continues.

See the below — and stay here for the latest.

Q: "Colonel Vindman, you haven't either?"