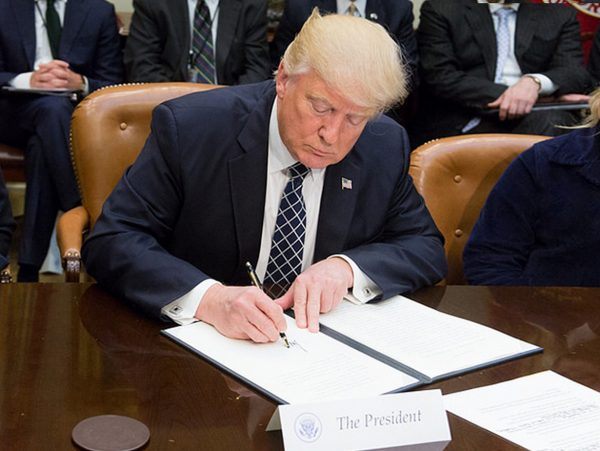 A sweeping new proclamation makes all the sense in the world — yet Democrats are already pushing back hard.

The White House on Friday night announced a proclamation [1] that will require immigrants to show they can get health insurance before they obtain a visa.

The measure goes into effect on November 3.

Under the proclamation, within 30 days of entering the United States, immigrants will need to get health insurance — or show they have enough money to cover their medical costs before getting a visa that could lead to a green card.

The new move comes as part of Trump’s tough-on-immigration stance from the very start of his presidency.

Nearly all Democratic candidates for the White House in 2020 [2] have said they believe our nation should allow people living in the U.S. illegally to have their health care coverage fully paid for by the government.

Most countries with universal health care systems do not have this provision.

An estimated 11 million people are living here illegally, the government has said (many people believe the actual number is far higher than that).

And of those 11 million — roughly 6 million are believed to be uninsured.

The White House decision would target those who seek to come here legally.

The federal government “indirectly pays for the medical care of the uninsured by covering the cost of care hospitals lose when they take in patients who can’t pay for their services,” noted the Washington Examiner. [4]

“People who are uninsured tend to seek care at emergency departments when they get sick, and hospitals are obligated to treat them,” it added.

“Immigrants who enter this country should not further saddle our health care system, and subsequently American taxpayers, with higher costs,” the White House proclamation noted — adding that the United States spent $35 billion on uncompensated care during the last decade.

This is actually the right thing to do. I am an immigrant. I have family visit every year. I purchase travelers health insurance for them. It is not wrong to expect people who enter the country to not be a burden to tax payers.#Immigration [10] #immigrant [11] https://t.co/j2fWAT92Uc [12]

In other words — this president is protecting U.S. taxpayers with this new move.

Even so, see how some of the mainstream media are framing the White House decision in the tweets below — and see other tweets as well (including from Democratic candidates for the White House in 2020).

Breaking News: Immigrants will be denied visas if they cannot prove they have health insurance or the ability to pay for medical care, the Trump administration saidhttps://t.co/3UX4ARLN11 [14]

The Trump administration will deny visas for immigrants who can’t prove they can afford health care. https://t.co/H9zISgifw4 [16]

President Trump has signed a proclamation barring legal immigrants who can't prove they will have health care coverage or the means to pay for it within 30 days of their arrival to the U.S.https://t.co/q74xhbvkMO [18]

The White House issued a presidential proclamation on Friday night requiring many future immigrant visa applicants to show they can afford health care, a move that could make it harder for poor migrants to enter the U.S. https://t.co/xVU9E5RAQZ [20]

As Democrats are obsessed with their farcical Impeachment Hysteria, President Trump is working to protect American taxpayers from being forced to subsidize the healthcare costs of immigrants. https://t.co/3fPzEgkCjM [22]

This is what we need to hear, not #MSM [24] conspiracy theories.

Donald Trump is panicking, and using cruel attacks on immigrants to distract and sow fear.

Immigrants contribute more to this country than Donald Trump or Stephen Miller ever could—and their hate won’t stop us from speaking out in defense of immigrants.https://t.co/bHO7bI40tb [26]

This is one of the cruelest policies to come out of this White House yet. A nation cannot be great if it is not good. https://t.co/YKCnVedTUw [28]

Immigrants will be denied visas if they can't pay for #healthcare [30] under new Trump rule https://t.co/OrSjXGbRTI [31] via @nbcnews [32] #healthequity [33]