A shocking report reveals that Ukrainians donated more money to the Clinton Foundation than any other county on Earth.

You’re thinking: Come on, those from Saudi Arabia had to have donated more?

The Saudis donated $7.3 million to the Clinton Foundation.

England? What about folks from England — they had to have donated more, right?

Ukrainians beat out people from both of those countries — and everyone else — by donating a whopping $10 million to the Clinton Foundation.

See this chart for yourself, published in The Wall Street Journal, about contributions made between 1999 and 2014: 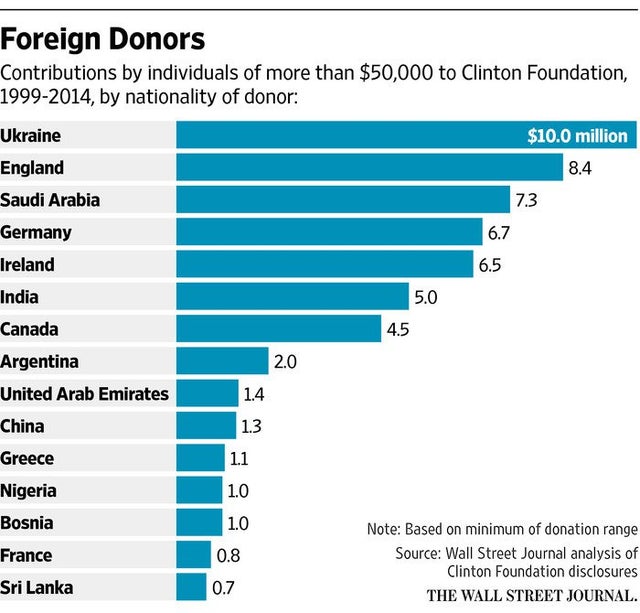 Said a report in DC Clothesline, “The far-Left media is still trying to ignore how many times Joe Biden grabbed some of that Ukraine stash for his family but chances are it wasn’t anywhere near what the Clintons did — and all with the blessing of President [Barack] Obama.”

It then quotes from an earlier report in The Wall Street Journal from 2015 about funding: “Between 2009 and 2013, including when Mrs. Clinton was secretary of state, the Clinton Foundation received at least $8.6 million from the Victor Pinchuk Foundation, according to that foundation, which is based in Kiev, Ukraine. It was created by Mr. Pinchuk, whose fortune stems from a pipe-making company. He served two terms as an elected member of the Ukrainian Parliament and is a proponent of closer ties between Ukraine and the European Union.”

The outlet then went on to “connect the dots that bind Mr. Pinchuk and the Obama White House” by quoting from another piece, this one an opinion piece by Andrew McCarthy in Fox News from a little over a week ago: “It is in connection with Paul Manafort that we encounter some genuine collusion targeting the 2016 campaign: willful collaboration among foreign governments, the Obama administration, and the Clinton campaign.”

“Manafort had brought influential Democrats into his Ukrainian work, such as former Obama White House Counsel Greg Craig and the consulting firm started by Obama and Clinton adviser John Podesta — a firm that is still run by Podesta’s brother.”

“Leshchenko just happens to be a vassal of Victor Pinchuk, a Ukrainian billionaire who just happens to give millions of dollars to the Clinton Foundation. Wonder of wonders, Leshchenko took a public, strident anti-Trump position during the U.S. campaign — highly unusual for a foreign parliamentarian,” the McCarthy piece also said.

McCarthy’s piece then also added, “Which brings us back to Serhiy Leshchenko, Ukraine’s unabashed Clinton backer. And [what do you] know: Besides serving the government in Kiev and providing scintillating geopolitical analysis, Leshchenko had a side job: He was a source for … wait for it … Fusion GPS — the Clinton campaign-opposition arm, led by Glenn Simpson, which later dreamed up the Steele dossier.”

The fact that Democrats think the American people are unable to “connect the dots” says a lot about how smug, elite and “out-of-touch” these people are.

Gone are the days when we would just take what they or their media flunkies said at face value.

Thanks to Trump, those days are long gone.

Someone should alert the Democrats — because they’re still playing the same old game.

MORE NEWS: How the United States Must Respond Now to the CCP’s Unprovoked Aggression Against Taiwan