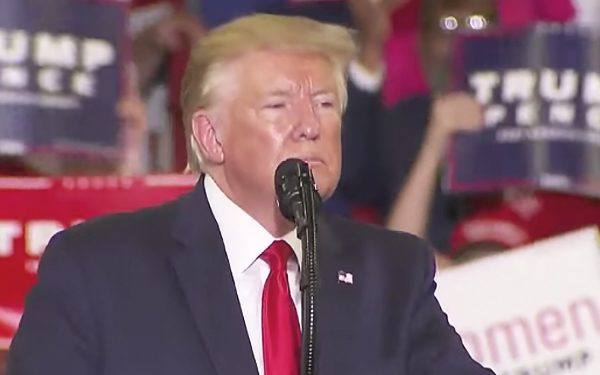 Of all the Trump rallies the president has held to date, “this may be the one with the greatest potential to make news,” said anchor Tucker Carlson of Fox News’ “Tucker Carlson Tonight” early on Thursday night before the president began speaking at a huge campaign-style rally in Minneapolis, Minnesota.

During a fiery speech that lasted almost two hours and in front of a crowd of apparently 20,000 (with many more thousands outside), the president touted the successes and initiatives of his administration, as he has always done at his rallies. He is seeking to turn Minnesota “red” in the 2020 election, as it narrowly went for Democrat Hillary Clinton in 2016 by a margin of some 1.5 percent.

But he also went after former Vice President Joe Biden and his son, Hunter Biden, for their Ukranian business dealings that have come under sharp scrutiny in recent weeks.

Related: Biden Bombshell: Was Their Coordination with House Dems? [1]

At one memorable point during the evening, Trump — on a roll — absolutely lit up the crowd by making a charge against Biden.

“He was never considered a good senator. He was only a good vice president because he understood how to kiss Barack Obama’s a**.” (And yes, he said the word.)

He also railed against “the insane impeachment witch hunt” against him.

Trump cited the news that emerged on Thursday night from the Washington Examiner [2] that the so-called whistleblower at the center of the House Democrats’ current impeachment push had previously worked with Biden.

The 2020 Democratic candidate with whom the CIA whistleblower had a "professional" tie is @JoeBiden [3], according to intelligence officers and former @WhiteHouse [4] officials. https://t.co/kELmnhhiL2 [5]

The president also went after the 2020 Biden campaign for trying to convince Facebook [7] and The New York Times [8] — as well as all major TV networks — not to cover what it called “conspiracy theories” about potential Biden corruption, as Fox News pointed out.

Trump — as he has frequently done during his rallies — praised America’s law enforcement and police across the nation [9] for all that they do to keep American citizens safe and protected.

“Cops love Trump and Trump loves cops,” he said to great cheers at one point.

Minneapolis police union Pres. Bob Krull tells FNC the website crashed for “Cops For Trump” T’s that @realDonaldTrump [10] tweeted about.
Krull says they’re selling/shipping nationwide as they get them in quanities of 500. pic.twitter.com/arx1JD5Xeb [11]

But even after all of the excitement inside the arena, there was more drama waiting outside.

Shortly after Trump’s speech ended and people began filing out of the Target Center, hundreds of anti-Trump protesters gathered outside the rally as they expressed their anger at the administration for one reason or another.

People carried “Lock him up” signs and more.

Some set fire to Make America Great Again hats and other memorabilia. Some even threw objects at police — some of whom were on horseback. Live television video on Thursday night showed a variety of objects being tossed by protesters.

Some of the protesters wore handkerchiefs over their faces and may have been members of Antifa; others held Black Lives Matter signs.

They want to prevent Trump from speaking in cities. He should defy them every time as he did in Minneapolis. https://t.co/ZHQq7RSTqa [13]

Eventually police broke up the crowd, according to reports. Multiple protesters were apparently arrested.

A reporter for The Washington Post posted a video on Twitter that appeared to show one protester punching a Trump supporter in the head as he left the rally, as Fox News noted. In that same video, the crowd could be heard shouting, “Nazi scum! Off our streets!”

The apparent Trump supporter was also slapped and pushed before eventually escaping.

As all of this action played out on Thursday night, Sen. Tim Scott (R-S.C.) appeared on Fox News’ “The Ingraham Angle” — and protesters could be seen on a split screen while he spoke on camera. He slammed those crowds and their apparent intimidation attempts.

“I’ve spent the day today running around South Carolina thanking law enforcement officers — from Charleston to Aiken to Hilton Head — thanking them for their service to this country. Watching this situation in Minnesota just sickens my stomach.”

Scott praised the Minneapolis police for their work to keep the peace amid the presence of so many angry demonstrators.

He said the protesters appeared to be trying to incite violence and to antagonize law enforcement.

Protesters at one point even appeared to block vehicles trying to leave a parking lot outside the arena, as multiple outlets reported.