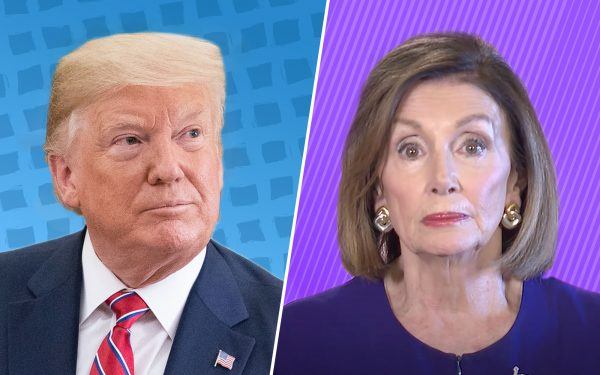 Democrats know that those running for the 2020 nomination cannot win, in my opinion — so they want to have a make-believe impeachment.

We need to ask House Speaker Nancy Pelosi (D-Calif) this question: Why do all the Democrats and the “fake news” media [1], as President Donald Trump calls them, use the exact same words over and over again when discussing this so-called impeachment inquiry?

And I do mean the exact words.

How much are they getting paid to repeat the same thing over and over again?

From the beginning, the Democrats, the intelligence community, and the liberal press have been involved in a conspiracy to set aside the results of a lawful election in 2016.

A lot of Republicans are going to demand payback, as I see it.

If a Democrat is elected president and the Republicans control the House, the speaker of the House should unilaterally declare an “impeachment inquiry” on the day the new president is sworn in — and an investigations should begin.

So some day, if a Democrat becomes President and the Republicans win the House, even by a tiny margin, they can impeach the President, without due process or fairness or any legal rights. All Republicans must remember what they are witnessing here – a lynching. But we will WIN!

It makes the liberals even more furious when conservatives peg them so accurately.

This impeachment inquiry behind closed doors and in such secret is disturbing.

My guess is they’re trying to get someone to tell them what they want to hear, even if it’s false.

During the Nixon years, the Watergate hearings were open and transparent; they were aired on channel 12 (PBS) at the time.

The actions of Congress and of others involved were right there for the American people to see and hear.

That’s the way it should be handled. The Democrats are terrified they won’t be able to get their impeachment.

It boggles the mind to consider there are people who throw around the word “democracy” but who refuse to take votes.

The Constitution says the House — meaning the entire body — has the power to impeach.

But Pelosi has decided that the clause means she alone is the “House.”

The truth is that these Democrats are terrified of democracy because members have to place their names on those votes. That is where the people of this republic will form their judgments — and democracy will kick in.

Democrats are chewing away at the fabric of democracy, to my mind.

Rep. Bobby Rush’s feelings got hurt because Trump used the word “lynching” — so he tweeted this:

You think this impeachment is a LYNCHING? What the hell is wrong with you?

An impeachment proceeding should begin with the identification of a crime or a misdemeanor.

Then that alleged act should be investigated, then voted on — and then a verdict rendered from there.

Yet today we see a witch hunt; different statements are cut and pasted together or outright made up — and then pursued. This is nothing but undoing the will of the voters.

On Monday night, Republicans introduced a resolution to censure Rep. Adam Schiff (D-Calif.) over his handling of the impeachment inquiry, but the Democratic-led House voted to set aside the measure.

All Democrats voted to table the censure resolution, with all Republicans voting to take action — a move Trump praised Tuesday morning.

Thank you Republicans. 185 out of 185 present voted for “US” last night. Really good!

Trump is right. The laws need to be changed to make the House follow the established rules that have been used in the past.

Trump cannot defend himself, and Schiff is a known liar and leaker to the mainstream media.

This is not how our government was established by the Constitution to operate.

Due process should be available to all, especially the president of the United States.

In the end, we will see there are at least a dozen high and mighty Democrat politicians involved in the 2016 Russian election interference and Trump investigation, in my view.

Trump knew this July 25 phone call would come up — which is why he finally released the transcript.

Democrats will end up being held responsible, and a lot of the Left’s beloved leaders will either go to jail eventually or will leave politics and go into hiding when it is all said and done.

President Trump has been spied on, slandered, investigated, undermined, and obstructed for over three years now.

The election of 2016 has been over since November of 2016, and the people’s choice for president has not had the luxury of a working Congress, a fair and impartial judiciary, upfront investigation and intelligence agencies, and even remotely honest news and media reporting.

The credibility of the government, law and order, due process and the will of the people is being destroyed.

The only person in Washington who is doing his job is Trump and a select group within his administration — and even now, there are deep-state politicians inside who are working against him and the American citizens.

Please, someone, put an end to this.