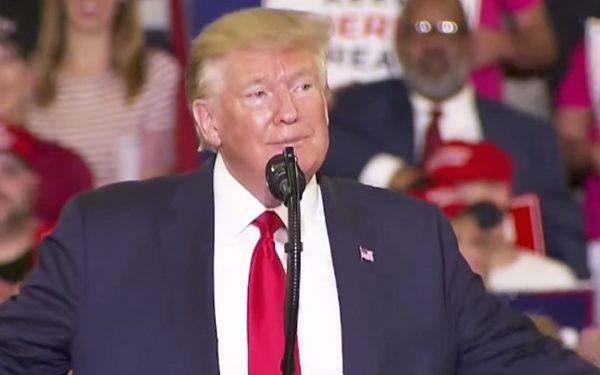 President Donald Trump in Dallas led yet another raucous campaign rally — this one in Dallas — on Thursday night just mere hours after Energy Secretary Rick Perry said he would soon step aside, sources said [1], as House Democrats continue conducting their impeachment inquiry against the president.

The rally comes at a key period of time for Trump.

His July 25 phone call with the president of Ukraine — the transcript of which he released — has been a hotly debated topic on Capitol Hill.

As part of the growing congressional probe, the House Democrats subpoenaed [3] Perry on Thursday, as Fox News noted.

Republicans have begun expressing some worry that Texas might not go for Trump in 2020.

Trump in 2016 carried the state by nine points.

“Democrats have pointed to demographic trends as well as the fact that Republican Sen. Ted Cruz won [his] re-election [to the Senate] by just over 2 points last year as evidence that the second-most populous state could soon be in play,” as Fox News pointed out.

He said the only message the “radical lefties” will understand is the election results next November.

See these tweets as the rally continued Thursday night — and share your thoughts:

Wow huge overflow at #DallasTrumpRally [5] more than 30,000. Bet the crowd is having fun and so far no one has been able to draw a crowd like @realDonaldTrump [6]. Do you think this is a predictor for #2020Election [7] ?

“The Do-Nothing Democrats have betrayed our country — and that great betrayal is over.” –@realDonaldTrump [6] pic.twitter.com/Hjpzsvx62t [9]

The only way @realDonaldTrump [6] loses Texas is if the Democrats find a way to get their precious illegals voting again.