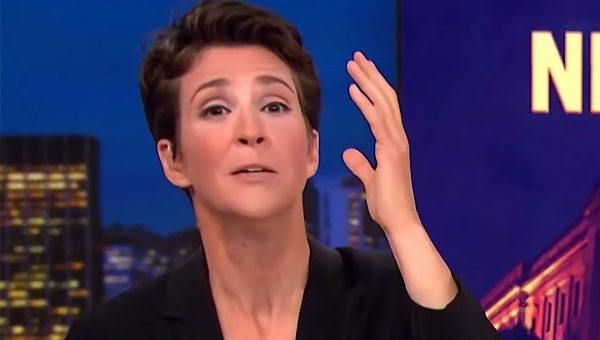 “It would be impossible for me to overstate the amount of consternation inside the building around this issue,” Maddow said before bluntly rehashing the all-too-familiar details and bringing Farrow on her show to condemn her employer.

The NBC News leaders essentially told Farrow to take his reporting elsewhere, so he published it in The New Yorker where it won a Pulitzer Prize and helped launch the #MeToo movement.

“When you take NBC’s word for it, NBC letting the story get away is a shame. But in Ronan Farrow’s telling, it’s not a shame. It’s a scandal,” Maddow said.

Maddow pointed out that the New Yorker published Farrow’s story “less than two months” after NBC sent him packing, implying that she believed the celebrity scion’s version of events.

Once Lauer was fired, Lack and Oppenheim famously refused to launch an outside investigation to determine who knew about his alleged misconduct. Instead, Peacock Network honchos allowed NBCUniversal general counsel Kim Harris to declare her colleagues were oblivious to all wrongdoing.

“There has been consternation, even inside this building, inside MSNBC and NBC News that that matter was handled with an internal investigation. That the company, in effect, investigating itself rather than hiring an external firm to do it,” Maddow admitted.

“NBC News is obviously our parent company here at MSNBC. The allegations about the behavior of Harvey Weinstein and Matt Lauer are gut-wrenching at baseline no matter who you are or what your connection is to this story,” Maddow continued.

“But accusations that people in positions of authority, in this building, may have been complicit in some way, in shielding those guys from accountability. Those accusations are very, very hard to stomach.”

NBC Universal spokeswoman Hillary Smith did not immediately respond when asked if Maddow’s comment will lead to an independent investigation.

Maddow read a statement that she was provided by NBC News declaring the network still stands by the internal review despite widespread scrutiny from people both inside and outside the troubled company.

Maddow began her show the way she does most evenings, delivering a lengthy monologue condemning President Donald Trump.

She eventually broke her silence on the Weinstein scandal — almost two weeks after Farrow’s book was released as NBC News faces everything from protestors swarming its New York City headquarters to some of the most powerful women in media urging parent company Comcast to step in.

“Rachel spoke for the voiceless and terrorized staff of NBC News when she described the terrible morale here. If her words can’t force an independent investigation — Noah and Andy have more immunity than Donald Trump,” an NBC News insider told Fox News.

“The Rachel Maddow Show” namesake hammered that the issue is troubling and ongoing, specifically inside NBC’s headquarters — all before Farrow joined her on set for the second half of the internal takedown.

“I can tell you that inside this building, this issue, the Weinstein story having to leave the building in order to get told, and combine that with another previous gigantic story on a related subject, the ‘Access Hollywood’ tape, Billy Bush story, also having to leave this building in order to get told, the amount of consternation this has caused among the rank-and-file people that work here would be almost impossible for me to overstate.”

Author and activist Sil Lai Abrams has said she is “one of the many survivors that NBC silenced” and recently detailed claims that her own sexual misconduct bombshell [4] was also shut down by NBC News.

“Noah Oppenheim wants to keep his job. This is his attempt to do so,” Abrams told Fox News. “Letting Maddow be the messenger is smart, but doesn’t change the structural issues at the network.”

NEWS: NBCUniversal offers to release "any former NBC News employee who believes that they cannot disclose their experience with sexual harassment" because of an NDA "from that perceived obligation." pic.twitter.com/zr2dewKDmR [5]

Maddow also broke the news on Friday that NBC would release alleged victims of sexual misconduct from non-disclosure agreements (NDA) upon request.

This is one of numerous issues that women’s groups have urged — but former NBC News correspondent Linda Vester’s Silence Breakers Alliance isn’t satisfied.

“NBC Universal’s statement is not enough. The company should not make any former employee, specifically women, go begging on their hands and knees back to NBC to be released from an NDA. Women have already been through hell with this company,” Silence Breakers Alliance told Fox News.

“Instead, here’s what NBC should do: issue a blanket statement simply releasing from NDA’s all current and former NBC News/MSNBC employees who have information regarding sexual misconduct, retaliation, silencing or coverups. Because it’s not just the harassment, it’s everything management does to enable perpetrators and harm victims,” the group continued. “

Silence Breakers Alliance pledged to help any current or former NBC News and MSNBC employees to come forward with information about wrongdoing at the company.

“Despite what Noah Oppenheim claims, the company most definitely does have secrets and something to hide,” Silence Breakers Alliance said.

Meanwhile, as Maddow mentioned, NBC News has still not explained how the infamous “Access Hollywood” tape of Donald Trump was leaked from within Oppenheim’s new division to The Washington Post’s David Fahrenthold — an old college buddy of Oppenheim.

Fahrenthold, like Farrow, won a Pulitzer Prize for his story that NBC News passed on under Oppenheim.

Fahrenthold was later given a paid consultancy with NBC News. Oppenheim and Fahrenthold attended Harvard University together, but NBC has long denied that Oppenheim leaked the scandalous tape to Fahrenthold.

Insiders have long believed that Maddow is the only person with the clout to get away with booking Farrow to attack NBC on MSNBC.

It is believed that she had planned the Farrow segment for quite some time and NBC News’ in-house media reporter Claire Atkinson even hinted at it earlier in the week.

It is unclear if Lack and Oppenheim approved of the segment, but Maddow is known to have complete control over her program.

Maddow remains MSNBC’s most-watched host despite viewers turning away when the Robert Mueller’s report failed to backup her longstanding allegations of collusion between Russia and the Trump campaign. While Maddow earned heavy praise on social media for calling out her own employer Friday night, not everyone was satisfied and MSNBC’s cash cow is clearly peeved at the leaders of her own network.

“Until there is an independent investigation… remains NBC’s word versus Ronan Farrow’s reporting and assertions,” she said.

Brian Flood covers the media for Fox News. This Fox News [7] article is used by permission.