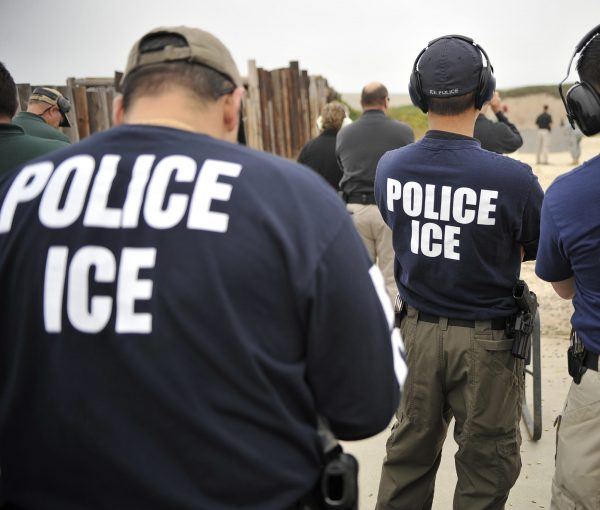 As anti-cop, anti-law and order, and anti-equal justice as the Left has become in recent years, a new incident out of Fairfax County, Virginia, is so much more than the typical head-scratcher.

This is a “twist your head off your shoulders and put it on a shelf for a spell” incident — and it reflects the leftist nonsense that “sanctuary” radicals [1] are forcing on America.

The police chief there is apologizing for one of his police officers. And what grave offense did the officer commit, you ask?

The cop committed the unspeakable crime of assisting ICE with arresting a wanted criminal who is allegedly in the United States illegally. [1]

This wasn’t a man mowing a lawn, washing dishes, putting a roof on a house.

No. The man had a federal warrant for his arrest issued by a federal judge for missing his deportation hearing.

Not only is the chief saying he is sorry that his own police officer enforced the law — he wants people to know that the officer will be “punished” for doing his duty.

The chief also said, “Our county is one of the most diverse counties in the nation,” as CNN reported, “and no one should have the perception that [the Fairfax County Police Department] is acting as a civil immigration agent for ICE.”

Well, it’s a good thing the intrepid police chief is on the case. Cops who enforce the law must be stopped before they apprehend any more criminals in the U.S. illegally.

Let cops keep this up — and the next thing you know, we’ll all be living in safer communities.

The police chief clearly had his law-abiding community’s safety uppermost in his mind. I mean, why investigate a potential illegal immigrant criminal when you can punish a sworn police officer who is working to take criminals off the streets?

Astoundingly — and no, this is not a comedy skit — Chief Roessler also said, “This is an unfortunate issue where the officer was confused. We have trained on this issue a lot. This is the first time we’ve had a lapse in judgment, and the officer is being punished.”

Related: Saying ‘Illegal Alien’ in a ‘Hateful’ Manner Is Banned in NYC [3]

This police chief is fully immersed in an ideological delusion. He suspended the officer from duty — for honoring an oath to uphold local, state, and federal laws.

And now, in an update on Thursday, the officer will return to full duty on Friday.

The chief said he made the decision, CNN [4] reported, after receiving an update from the internal affairs bureau and reviewing a procedural policy recommendation. “I have confidence that our officer will represent us well throughout his career,” Roessler is saying now.

He said he had to read the story several times because he wasn’t “sure he was seeing things straight,” as Townhall noted of his interview.

Homan even refused to call Roessler a police chief, instead calling him a “politician.” And Homan also said, “He stopped being a cop with that [original] decision.”

He added, “If I [were the] ICE director today, I’d hire that officer.”

The key tangential issue here is this: There is sympathetic coverage in the mainstream media toward illegal aliens and against law enforcement.

For example, The Washington Post used the word “illegal” only once in its 726-word story about a suspected illegal alien. The word showed up only once in reference to Fairfax County’s ending an agreement with ICE to “hold inmates suspected of being in the country illegally past the end of their sentences” (emphasis mine).

The publication’s political correctness butchers English generally and journalism specifically by refusing to distinguish between legal and illegal immigrants, using only “immigrants.” You also have to wonder if the writer meant for the sentence to convey “in the country illegally” — or to say the inmates were held “illegally past the end of their sentences?”

So what happened? Let’s recap it exactly.

On September 21, while investigating a traffic collision, the Fairfax County police officer found that a driver had no valid driver’s license. So the officer ran the driver’s information — and discovered he had a federal warrant issued for failing to attend a deportation hearing.

The officer did what all good cops would do. He or she verified the warrant and contacted the originating agency (ICE). The officer would have done the same if the requesting agency were another police department, sheriff’s office, or the FBI.

ICE was nearby and responded to the collision scene and arrested the wanted man.

I choose to believe the officer knew exactly what he or she was doing on September 21 — the right thing.

This is textbook police work — in the real world — and it should have ended there.

But cops no longer operate in the real world. The Left is creating a world in which cops are expected to ignore the rule of law, disregard equal justice, and violate their oaths of office — whenever the radical Left says so.

The officer also issued the wanted man a citation for driving without a license. The Post kindly informed its readers that this “would normally result in the person being let go.”

Yes — if the man didn’t have a federal warrant for his arrest!

The way the police chief spoke originally about this defies reason: As the account noted, “Roessler said the officer had been on the job for only a ‘few years’ but that it did not excuse the error. He said the officer was aware it was a mistake and had not willfully violated the department’s policy on cooperation with ICE.”

Right. I’m sure that’s exactly what the officer “was aware” of — that he or she accidentally enforced the law. Perhaps the officer’s union rep offered that initial administrative statement. But whether the chief is making it up or the union recommended the statement doesn’t matter.

I choose to believe the officer knew exactly what he or she was doing on September 21 — the right thing.

And I salute the officer for it.