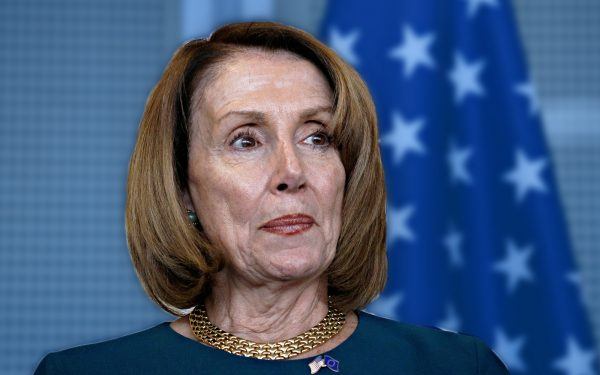 Just before calling the vote in the House for lawmakers to continue with their impeachment inquiry “sham,” [1] as many people see it, House Speaker Nancy Pelosi (D-Calif.) gave an awkward speech on the House floor on Thursday.

When the vote finally came down [1], Pelosi took a huge political blow — as the vote was almost totally along party lines.

No Republicans at all voted for the sham.

Two Democrats defected on the vote — casting a ballot against Pelosi, in other words.

Here’s the reason this was a blow to Pelosi.

Back in March, the speaker made it perfectly clear that in order for any impeachment effort to be successful, she would need “bipartisan” support.

In March, Nancy Pelosi said that she wouldn't move forward on impeachment without bipartisan support.

As Pelosi gave her pre-vote speech, she made what many would call a Freudian slip.

Pelosi told the chamber of Democrats and Republicans [3] that the impeachment of President Donald Trump was not about “patriotism.”

Pelosi struggled to recover after the oh-so-truthful words came out of her mouth, and finally said the word “partisan.”

“It’s about patriotism,” she repeated.

Her good buddies over at CNN, of course, edited her quote to help her sound “patriotic” and sane, in my opinion.

By the way, how can it not be partisan when no Republican voted with her?

Related: On Impeachment ‘Sham,’ ‘Why Do You Not Trust the People?’ Says Kevin McCarthy [3]

In another interesting moment, Pelosi said nobody has come to Congress to impeach President Trump.

To watch Pelosi’s Freudian slip, watch the second video below:

Speaker Pelosi: "This isn't about anything personal with the President. It isn't about politics … it isn't about partisanship. It's about patriotism" pic.twitter.com/RqPA6PLo2E [4]