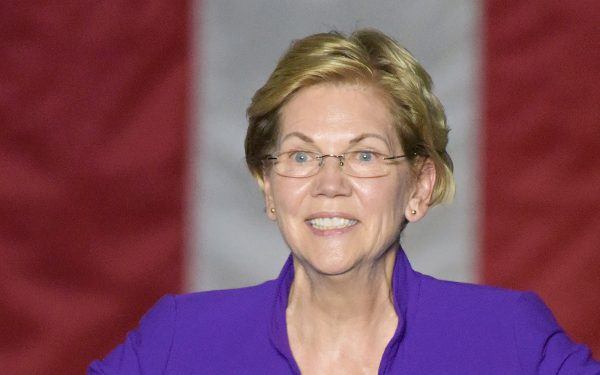 Sen. Elizabeth Warren (D-Mass.), currently the leading 2020 Democratic presidential candidate [1] in many polls [2], has pledged to “fight” for illegal immigrants to be given back pay.

Many Americans may not realize this point, however — because this key detail in her “Empowering American Workers and Raising Wages” plan — which she released on October 3 — hasn’t gotten much attention in the mainstream media.

The Warren workers plan declares that illegal immigrants will be eligible to receive back pay for previous work they did in the United States — and the progressive senator is apparently determined to make this happen by amending the National Labor Relations Act (NLRA).

Warren explained all about it in a post on Medium. [3]

She said her plan includes “ensuring employers can’t exploit undocumented workers and drive down standards for all workers.”

“The 2002 Supreme Court case Hoffman Plastic Compounds v. NLRB held that an undocumented worker could not receive the back pay he was owed from an employer who had violated the NLRA,” she also wrote. “That 5–4 ruling is wrong and denies millions of undocumented workers redress for illegal firings or other retaliatory conduct by an employer.”

“The case encourages employers to hire undocumented immigrants and exploit them in numerous fields, including construction and manufacturing, which could lower wages for all workers,” she also said.

“I will fight to amend the NLRA to end this form of exploitation and ensure that all workers are protected.”

Related: Warren Tells Two Stories: Fired for Being Pregnant, Then Maybe Not [4]

Interestingly, Warren’s plan does not include punishments for businesses or employers who choose to hire illegal immigrants over American citizens who are ready and willing to work.

It also lacks any reform to the H-1B visa program — in which Americans are replaced by foreign visa workers to increase the profits of multinational corporations.

“Warren has not endorsed mandatory E-Verify — a system that prevents businesses from hiring illegal aliens over Americans — though it would decrease foreign competition against Americans, especially those most vulnerable to competing against illegal aliens in the labor market,” as Breitbart [5] noted.

Every American citizen should arm himself or herself with information and awareness about this by reading Warren’s proposal in full in her Medium [3] post.

The plan is but one example of the dramatic leftward turn the modern Democratic Party has taken.

Progressive Democrats such as Warren apparently care far more about helping illegal immigrants than they do about improving the lives of so many current, hardworking and law-abiding American citizens.

While Warren is doing everything in her power to try to put more cash in the pockets of unlawful immigrants, President Donald Trump is focused on getting more jobs for the American people — and he’s been successful at doing this so far in his presidency.

The unemployment rate also hit a new 50-year low at 3.5 percent in September, according to federal data released recently.

The number of new jobs fell short of the 145,000 jobs that the Labor Department had expected to be created, but the steady and low unemployment numbers indicate a strong American economy.

The unemployment number is now at the lowest point since 1969, as CNN [8] and other outlets have pointed out.

That 50-year low is astounding.

Trump’s “Buy American, Hire American” [9] agenda could not be more different than Warren’s job plan — as the 45th president has focused on delivering wage hikes for America’s blue-collar employees and working class.

Look at Trump and Warren on this issue alone — and it’s clear only one of them truly cares about helping American citizens.

That choice is pretty obvious.

See some related information in the tweets below — and share your thoughts.

WOW! Read this response by @SenWarren [17] @ewarren [18] concerning the loss of a mother’s child by an illegal alien – and let her response just “sink in” for a minute, regardless of party affiliation. https://t.co/LhPcYRy3ls [19]