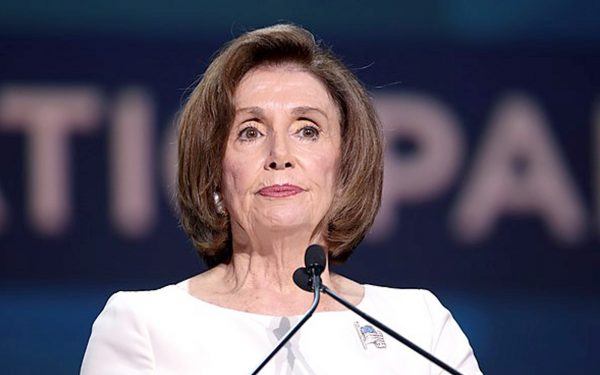 Speaker of the House Nancy Pelosi (D-Calif.) received some bad news on Wednesday.

An ethics complaint filed against her claims she usurped authority from the executive branch of the government by “weaponiz[ing]” the congressional impeachment process against President Donald Trump [1].

That was only one of the many charges against her in the complaint, which 40 conservative groups signed.

Jenny Beth Martin of Tea Party Patriots Action [2] led the conservative groups; she wrote the complaint to the Office of Congressional Ethics, The Hill [3] reported.

In the complaint to board chairman David Skaggs, Martin wrote that a vote scheduled for this week on the House’s impeachment inquiry — it’s scheduled for Thursday, reportedly — was “insufficient” to dispel notions of partisanship from the process, which they argued Pelosi has undertaken unilaterally.

“Speaker Pelosi’s conduct is an encroachment across the constitutionally-mandated separation of powers,” the complaint stated.

“She has no business examining or investigating the president’s legitimate exercise of his authority to determine the foreign and national security policy of the United States.”

“In launching her ‘official’ impeachment inquiry without benefit of a vote of the full House of Representatives and without indicating anything remotely qualifying as ‘treason, bribery, or other high crimes and misdemeanors’ that is the subject of the inquiry, Speaker Pelosi has weaponized impeachment,” the complaint added.

“She and her Democratic colleagues are using the impeachment process as a weapon of partisan political battle, rather than as the means to defend the Constitution our Framers meant it to be.”

Martin later released a statement saying that “the genie cannot be put back into the bottle” after Democrats began the impeachment inquiry without a formal House vote.

“Speaker Pelosi’s latest impeachment gambit — at last, a vote of the full House! — is merely a continuation of her ongoing roughshod-running,” said Martin. “The genie cannot be put back in the bottle. All that ‘evidence’ that has been gathered before the casting of a single vote is tainted by the corrupt, secret process in which it was gathered. It is poisoned, and must be discarded for the sake of fairness.”

Pelosi, as of Wednesday evening, has yet to respond to the ethics complaint.

Pelosi is leading the charge in the impeachment inquiry against Trump, which was launched over claims he pressured — during a July 25 phone call [4] — Ukrainian President Volodomyr Zelensky to investigate former Vice President and Democratic presidential candidate Joe Biden and his son Hunter Biden’s business dealings in the nation.

Those who support Trump argue that Pelosi and her fellow Democrats have been carrying out the impeachment proceedings insufficiently by bringing in a steady stream of witnesses to argue that a “quid pro quo” existed between Trump and Zelensky over U.S. military aid and plans for Ukraine to investigate the Bidens.

This piece originally appeared in the Objectivist [5] and is used by permission.