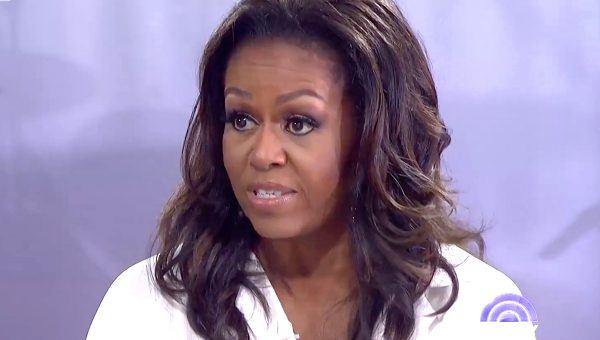 As an uninspiring field of Democrat candidates gets set to take the stage for a debate in New Hampshire, a new poll from the same state suggests Michelle Obama would lead the field if she were to enter the 2020 presidential election.

However, should Obama jump into the race — a dream come true for liberal voters who see the current field as just more of the same — she’d immediately vault to the front in the New Hampshire Democratic primary.

According to the Boston Herald, the former first lady would garner 26 percent of the vote in a theoretical matchup — while Warren and Biden would each get 20 percent, with Sanders trail at 15 percent.

Michelle Obama would be an instant front-runner if she jumped into the New Hampshire Democratic primary, a new Franklin Pierce University-Boston Herald poll shows. https://t.co/C3uiQaodny [3]

Filmmaker Michael Moore, for some unknown reason a man viewed as an intellectual authority on the Left, claimed this past August that Mrs. Obama would not only defeat President Trump but that she’d “crush” him.

“The only way to remove Trump is to crush Trump,” he said in an interview [5] with MSNBC.

“And that’s the question that has to be asked, who can crush Trump? Who’s the street fighter?”

“In fact, it is Obama – Michelle Obama,” Moore continued. “Everybody watching this right now knows she is a beloved American and she would go in there and she would beat him.”

Moore, like many Democrats, is practically begging for Michelle to enter the race, not because of her odds of beating Trump, but because the current field is so boring and divisive.

Obama, herself, quickly squashed the notion by saying there is no chance she’d enter the race.

In an interview with a young journalist at Amtrak Magazine The National [9], she was asked, “If you thought the country needed you and you thought you could really help our nation, is there even a one percent chance you’d consider running?”

“Just between us, and the readers of this magazine — there’s zero chance,” Mrs. Obama replied.

Just between us, this country would never reach a state where the call for an Obama in office would be necessary.

GOOD GOD NO: @MichelleObama [10] says she’s not interested in running for president 2020, instead she wants to create ‘thousands of me’s’! That’s all #America [11] needs more mean people! #TriggerALiberalIn4Words [12] swamp pic.twitter.com/fD7yi2xEUN [13]

Make no mistake: It isn’t a lack of confidence holding Obama back.

She wants to go above and beyond simply running for president.

Instead, she’d like to create an army of “forever first ladies [15].”

Michelle Obama has, on multiple occasions, declared it would be a good idea [16] for the country to “invest in creating thousands of ‘me’s.'”

Because, you see, those thousands of me’s would be as smart and witty as she.

“I have never had the passion for politics,” she explained at a conference last year.

“Just because I gave a good speech, I’m smart and intelligent doesn’t mean I should be the next president.”

Besides, this is the same woman who complained that the hardest part of her entire tenure as the first lady was enduring the racism of her fellow Americans.

Speaking at the Women’s Foundation of Colorado’s 30th anniversary in July of 2017, Obama revealed that after “working really hard for this country,” there would still be people “who won’t see me for what I am because of my skin color.”

Yet, here she is just four years after Barack Obama, the man with the same skin color, left office, leading a poll in the race to become president in 2020.

This piece originally appeared in The Political Insider [19] and is used by permission.