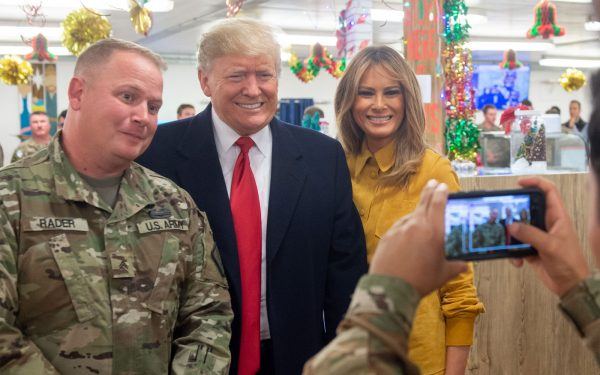 It appears to me that many liberals spend their lives merely waiting for an opportunity to attack our current first family.

Related: Melania Barely Arrives in Wyoming When She Is Mocked Again [1]

And every time they do it — they get it wrong.

This new time is no exception.

First lady Melania Trump announced on Twitter yesterday that she will be overseeing an exciting new project at the White House: the construction of a “tennis pavilion.”

The proposal states the tennis pavilion will be “approximately 1,200 square feet in area and approximately 18 feet in height,” and that it will be “clad in limestone and have a copper roof.”

“This new structure will be located west of the existing tennis/basketball court.”

“It is my hope that this private space will function as a place to gather and spend leisure time for first families,” Melania Trump wrote thoughtfully and graciously in her tweet.

I am pleased to announce the ground breaking of a new tennis pavilion on the White House grounds. This structure will be a testament to American craftsmanship and skill. pic.twitter.com/6sY3anuOk2 [2]

Exciting to break ground on the new tennis pavilion project at the White House today. Thank you to all who will help in making this legacy piece possible for future first families to gather at and enjoy for years to come. @theNationalMall [4] @NatlParkService [5] pic.twitter.com/UcYLeJ27Ni [6]

Most importantly, the pavilion construction will not use one red cent from taxpayers.

“The proposal described a two-phase plan. According to the proposal, the first phase will ‘replace a small building that currently houses a restroom and a storage space on the White House grounds just southwest of the White House itself.’ The second phase will involve replacing a maintenance building dubbed ‘The Pony Shed,’ which is used by National Park Service workers,” as CNN [8] noted in a piece about the development.

“The first lady’s tweet included three photos of her in a navy coat and her signature high heels, shaking hands and smiling with a group of people. One of the images shows President Donald Trump from behind, also greeting the group, who are not identified,” the news outlet also noted.

Not long after Melania Trump’s tweet, her office sent out a press release noting the new tennis pavilion will be funded by private donations.

Donors were not listed.

The release also said the project was “fueled by Mrs. Trump’s … passion to provide a functional recreational area for all first families to enjoy.”

Here’s what else CNN [8] said about all of it: “The building proposal from the National Park Service states the pavilion will ‘provide a unifying element for the tennis court, the Children’s Garden and the Kitchen Garden.’ The White House Kitchen Garden was a project created by then-first lady Michelle Obama, to plant and grow fruits, vegetables and herbs and provide an example of sustainable gardening. The Children’s Garden was founded in 1968 by then-first lady Lady Bird Johnson as a place for future first grandchildren to play. It includes cement footprints and handprints of previous presidents’ children and grandchildren on a paved pathway, as well as a pond for koi fish and a tree that kids can climb.”

It appears many liberals, however, don’t pay attention to things like “facts.”

People on Twitter didn’t seem to bother to research the project or look into it (in order to discover that it’s all privately funded) — before they began to whine and cry over how expensive the project would be and what a “waste” of their “tax dollars” it would be.

“You Trumps sure do love spending the taxpayers’ hard-earned money,” one person tweeted.

You Trumps sure do love spending the taxpayer's hard earned money. This is absurd.

“Thanks for wasting our money,” someone else wrote.

Thanks for wasting our money.

“We can’t afford all the golf outings,” said still another person.

“What makes you think we want a WH tennis court?”

We can’t afford all the golf outings. What makes you think we want a WH tennis court

“How much will this cost us?” noted another commenter.

“Have you ever held a shovel before?”

How much will this cost us?
Have you ever held a shovel before?

“Another waste of taxpayer money,” said yet another person on social media.

Another waste of taxpayer money.

“How much did that cost me, birther lady?” said still another.

How much did that cost me birther lady?

And then there was this one.

What a waste of my tax dollars, Mel.

Far too many of these people seem to enjoy being miserable and unhappy, as I see it.

A version of this piece originally appeared in WayneDupree.com; [18] this article is used by permission.

Read more at WayneDupree.com:
Proof That Romney and Hillary Colluded Behind the Scenes Over Mitt’s Potential Secretary of State Position in 2016  [19]
Glenn Beck Just Released Audio of Ukrainian Official Admitting He ‘Interfered’ in 2016 Election to ‘Help Hillary’ [20]
A Confused Pelosi Slurs, Stammers and Claims Abe Lincoln Was a ‘Founding Father’ [21]