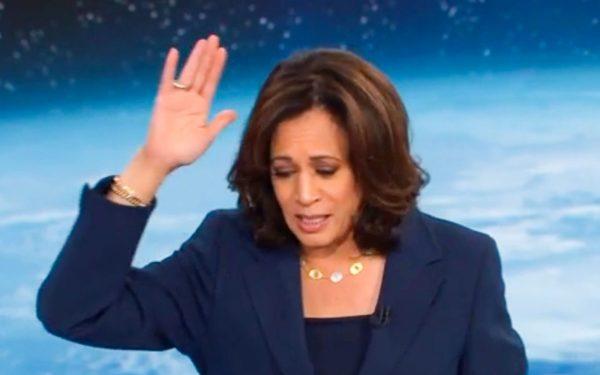 The California Democrat and candidate for the 2020 Democratic nomination [1] has a message for CEO Jack Dorsey of Twitter: Let’s get Trump off the platform.

Simple answer: She doesn’t like the president or his ideas.

On Tuesday, Harris actually urged Twitter’s leader to “do something” about the problem, as she sees it.

President Donald Trump on Tuesday evening took to Twitter himself — as he often does, to speak directly to the American people.

He went after House Democrats for their constant attacks on him and their current push on an impeachment inquiry [2], claiming the ongoing efforts against him amount to a “coup.”

“As I learn more and more each day, I am coming to the conclusion that what is taking place is not an impeachment, it is a COUP, intended to take away the Power of the People, their VOTE, their Freedoms, their Second Amendment, Religion, Military, Border Wall, and their God-given rights as a Citizen of The United States of America!” Trump wrote in a series of tweets.

As I learn more and more each day, I am coming to the conclusion that what is taking place is not an impeachment, it is a COUP, intended to take away the Power of the….

….People, their VOTE, their Freedoms, their Second Amendment, Religion, Military, Border Wall, and their God-given rights as a Citizen of The United States of America!

And Harris reacted to these tweets early in the evening on Tuesday.

That’s when she made her plea to Twitter’s CEO Jack Dorsey, as Fox News [5] noted in a piece.

Quick side note here: Sen. Harris, is that what you think America is about — silencing those you don’t like, don’t agree with, would prefer not to hear from? Get them off a social media platform — shut them down?

What if someone didn’t or doesn’t agree with your thoughts — would that person then be able to shut you down?

Most Americans know you wouldn’t like that very much.

We do also have something called the First Amendment in this country.

But her call to action first arose on Monday when the Democrat insisted Trump should be suspended from Twitter because of his comments about the so-called whistleblower who has upended Washington by sharing information the person heard second- or even third-hand about a July 25 phone call that Trump had with the president of Ukraine.

The New York Times identified the whistleblower recently as possibly a CIA operative, [9] though the person’s full identify is still being protected.

“The president’s tweets and his behaviors about this [matter] are just further evidence of the fact that he uses his power in a way that is designed to beat people down instead of lift people up,” Harris declared on CNN. [10]

She also said on that network in an interview, “Frankly, when you look at what he’s been tweeting today directed at the whistleblower, directed at so many people, you know, I frankly think that based on this and all we’ve seen him do before, including attacking members of Congress, that he, frankly, should be — his Twitter account should be suspended.”

She’s receiving plenty of pushback right now for these comments — and time will tell where her “requests” will go.

To set the record straight, there are many things said on Twitter that many people don’t like — that’s a fact.

An elected senator from the state of California, or from any state, for that matter, should know better than to say what she has said.

She can disagree with the president, disagree with Republicans, disagree with whomever she chooses. And she can vote the way she chooses on matters that come before her — but trying to shut down someone on Twitter or any social media platform is not exactly her choice or her right.

It’s not right of her to request it.

As the impeachment inquiry battles intensify, Rep. Liz Cheney (R-Wyo.), chair of the House Republican Committee, said the other day she wants answers about how much Democrat leaders knew about the whistleblower’s complaint [11] before the whistleblower actually registered that complaint.

That’s because House Speaker Nancy Pelosi (D-Calif.) made some stunning comments during an interview on the CBS News program “60 Minutes” on Sunday night.

“He told me it was perfect, that there was nothing on the call,” Pelosi said on the show, referencing a conversation she had with Trump before the White House released the transcript of his July 25 phone call with the Ukrainian president as well as the whistleblower’s complaint.

“But I know what was in the call,” Pelosi continued — before quickly adding, “I mean, uh, it was in the public domain.”

Pelosi’s remark almost immediately “drew scrutiny from Republicans,” as Fox News [13] pointed out, “because no verbatim account of Trump’s call had yet been made publicly available.”

As Cheney wrote on Twitter on Monday, “@SpeakerPelosi [14]⁩ said on ’60 Minutes’ last night she knew the details of the classified Ukraine call before White House released [the] transcript.”

“This is starting to seem like a political set-up,” Cheney continued. “So, Madame Speaker, ‘what did you know and when did you know it?’”

.⁦@SpeakerPelosi [15]⁩ said on 60 Minutes last night she knew the details of the classified Ukraine call before White House released transcript. This is starting to seem like a political set up. So, Madame Speaker, “what did you know and when did you know it?” pic.twitter.com/g5tlL5hBsX [16]