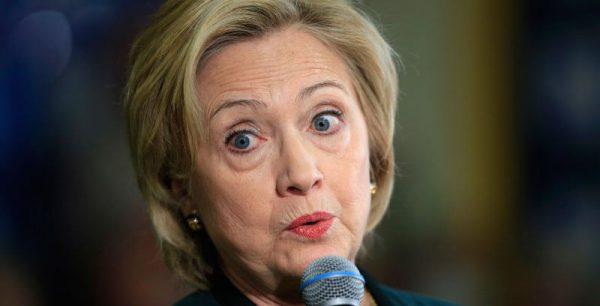 The Political Insider recently asked Juanita Broaddrick what she thought about Hillary Clinton’s recent comments suggesting women who are upset with being groped by Joe Biden need to “get over it” [1] — and she had the perfect response.

In an interview with People Magazine [3], Clinton — who recently boasted that her “gutsiest” life move ever was to stick it out with her womanizing husband [4] — brushed off concerns that Biden is unable to contain his creepy behavior.

This past year, several women accused Biden, one of the frontrunners for the 2020 Democrat nomination, of inappropriately touching them and making them feel uncomfortable.

The torrent of accusers began with former Nevada Assemblywoman Lucy Flores — who alleged Biden inappropriately kissed her and smelled her hair. [5]

Some of the uncomfortable interactions involving the former vice president, captured in images over the last several years, have involved young people.

Hillary Clinton Defends Joe Biden After Controversy About How He Interacts with Women and Girls: ‘Get Over It’ https://t.co/S1V6YvTCQe [6]

But in the interview, Hillary Clinton said the allegations of groping are minor compared to the need to take President Donald Trump out of the White House.

“This man must be defeated,” she said.

“People who are putting themselves forward, which believe me, is a really difficult process to undergo, should be judged on the totality of their lives and their service.”

And so what if a few women and girls are groped against their will in the process?

“We can pick apart anybody. I mean, that’s a great spectator sport,” she said.

“But this man who’s there in the Oval Office right now [meaning Trump] poses a clear and present danger to the future of the United States,” the contemptuous woman said. “So get over it.”

Broaddrick, a former nursing home employee who accused Bill Clinton of raping her decades earlier when he was a gubernatorial candidate in Arkansas, hammered Hillary Clinton for being dismissive of these women.

“She probably thinks that is so minor compared to what she did to all of her husband’s victims, now survivors,” Broaddrick told The Political Insider during an interview.

Ken Starr, the famed special prosecutor behind investigations into the Clintons’ Whitewater and Lewinsky affairs, has analyzed Hillary’s role in attacking the women [9] who accused her husband of sexual misconduct and crimes.

In his book, “Contempt, A Memoir of the Clinton Investigation,” Starr referred to Hillary as a “systematic enabler” who was “viciously attacking the various women who came forward to say they were Bill’s paramours.”

“The verbal assaults on women by the Clintons and their surrogates, who hurled demeaning epithets such as ‘trailer park trash,’ would become unthinkable in 2017 and 2018,” he wrote.

In other words, seduced into an affair with Bill? In Hillary’s world — get over it.

And now she’s demeaning all those who have been the victims of uncomfortable touching at the hands of Joe Biden, including his wife, [10] simply because of her hatred for President Trump.

Is there a colder, more politically calculating woman on the planet — in our view — than Hillary Clinton?

Read more at ThePoliticalInsider.com:
Pelosi: Sacrificing the House in 2020 Worth It To Impeach Trump [12]
Watch: Schiff Confronted by George Stephanopoulus For Making Up Trump Quotes, Keeps Lying [13]
Could Impeachment Lead to President Pelosi? [14]