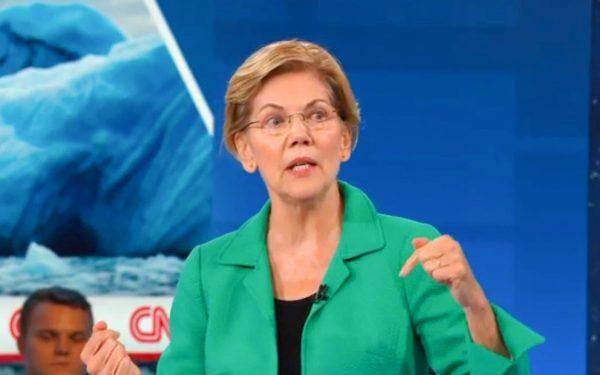 Sen. Elizabeth Warren (D-Mass.) is now the Democratic frontrunner [1] with a 26 percent approval rating — that’s according to a new poll from Economist/YouGov [2] that was conducted between September 28 and October 1.

Democratic voters were asked: “If the Democratic presidential primary [1] or caucus in your state were held today, who would you vote for?”

Warren clocked in at 26 percent, followed by former Vice President Joe Biden [3] at 22 — meaning she has a full four-point lead over him.

Sen. Bernie Sanders (I-Vt.) came in a distant third with 14 percent, while all other Democratic candidates remained in single digits.

However, when it’s broken down into categories, both Biden and Sanders show areas where they lead Warren.

When it comes to African-American voters, Biden leads Warren drastically, pulling in 36 percent to her 15 percent.

With Hispanic voters, Warren comes in third at 17 percent, while Biden gets 22 percent and Sanders registers at 19.

Sanders wins with 18-29 voters, capturing 22 percent, while Warren only gets 19.

Biden doesn’t lead  in any age categories except 65+ category where the former vice president gets 35 of the vote to Warren’s 33 percent.

She also leads among self-identified “liberals,” with 36 percent to Biden’s 17 percent.

Biden is the top choice for self-described “moderate” and “conservative” Democratic voters.

#NEW [7] poll of the 2020 Democratic primary from The Economist and YouGov:

The poll also asked: “Which candidate or candidates are you considering voting for in the Democratic presidential primary or caucus in your state in 2020?”

Warren leads again with 53 percent, followed by Biden at 42.

Respondents were asked to select “all that apply” so these rankings are not necessarily slicing up 100 percent.

Democratic voters were also asked: “Are there any presidential candidates that you would be disappointed if they became the Democratic nominee?”

This was also a “select all that apply” question.

Biden and Sanders got 22 and 21 percent, respectively, of the “disappointed” vote.

Warren received the lowest score with just 10 percent, but Mayor Pete came close with only 11 percent; 32 percent said they “would not be disappointed if any of the candidates became the nominee.”

The Economist/YouGov poll has a margin of error of +/- 3.1 points.