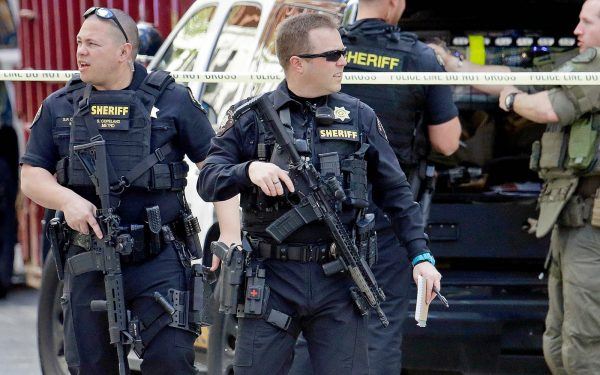 Despite the antipathy oozing out of America’s radical leftist city halls onto their police departments, law enforcement officers across the nation continue to protect and serve their communities — when they can get away with it.

For example, in Seattle — a town whose political leaders have made no secret of their disdain for the city’s finest — the cops are not only doing what they can to deliver traditional police protection and services, they’re also innovating to improve that protection and those services.

The Seattle Times [1] recently reported on a new program created by a cop, a military veteran, and a doctor.

The four-day training, paid for by a grant from Motorola, employs technology, including smoke machines, lights and sirens, and even “robotic mannequins capable of bleeding and yelling out in pain.” This creates realistic simulations that are intended to stimulate the officers’ human stress reactions, “triggering tunnel vision, auditory exclusion, and the loss of fine motor skills.”

This allows cops to put into their mental Rolodex the skills necessary to perform despite the chaos. Officers can then better concentrate on aiding the injured.

The LECC training focuses on responding to and securing natural and manmade mass casualty scenes, such as building collapses or mass shootings. This way they can render aid to victims more effectively. The trainers describe this instruction as “a blend of battlefield and civilian medicine.”

The “SPD is among the first police agencies in the nation to train and equip officers to treat victims of violence when a scene is still too dangerous for fire department personnel to enter,” The Seattle Times [1] noted.

Obviously, the aid that officers provide is at a higher level than basic first aid. So, another improvement today is that officers who previously had to purchase their own advanced medical supplies can now get them from the SPD quartermaster.

Not only are the department’s EMTs receiving enhanced training, new officers attend a full-day class — and instructors recently provided a two-hour course for the entire department.

Back when I first joined the department, cop first aid consisted of a sympathetic hand on a shoulder and a hearty, “Hang in there, buddy, I hear the fire department’s sirens getting closer.” That may be exaggerating — but many cops, like yours truly, don’t exactly love medical training.

After all, if we wanted that, we would have become firefighters, EMTs or paramedics. And, quite frankly, not many cops have a whole lot of sympathy for an injured murderer or rape suspect.

Still, cops can’t deny that enhanced medical training and better equipment allow officers at a scene, not yet secured enough for the fire department, to begin medical procedures that save lives. This includes treatment not only for injured victims or suspects but also for fellow cops.

And the skills officers gains rendering advanced medical aid to an injured suspect will translate to improving those skills when aiding innocent victims and fellow police officers.

As empirical evidence of the program’s effectiveness, The Times reports that “before 2018, when officers began receiving the LECC training, one tourniquet was used on average every three to four months, Verhaar said. Now, officers are applying two to three tourniquets a month.”

Saving lives by improving the chances a victim will survive his or her injuries — until Seattle Fire Department medics can arrive and then transfer the patient to the ER nurses and docs at Harborview Medical Center — is a worthy goal.

Although the city’s political leadership may not appreciate such efforts as much as they should, I’m sure the residents of the city appreciate it, especially those who’ve directly benefitted.

People see that their police officers don’t stop finding ways to help them, despite the obstacles politicians place in their path.

Why? Because protecting and serving is what cops do — when they are allowed to — or when they can get away with it.