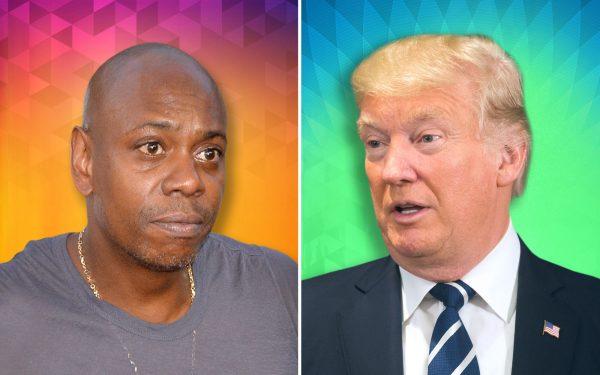 Dave Chappelle (shown above left) is not the hero we expected — but he’s the hero we need right now, in my opinion.

No, he’s not some MAGA hat-wearing Trump supporter and he’s not bashing just liberals. He dishes out his jabs pretty fairly across the board.

But Chappelle is doing the Lord’s work.

He’s making fun of the things that nobody is supposed to be laughing about.

Chappelle is bringing humor back — and with that, he’s relieving a lot of the tensions that have built up after a decade-long chokehold of political correctness.

So, when Chappelle accepted his “Mark Twain Prize for American Humor” at the John F. Kennedy Center for the Performing Arts in Washington, D.C., [1] on Sunday night, and made a reference — albeit small — about the First Amendment that has come under so much attack lately and the Second Amendment, as well, that has come under attack, it mattered.

It’s wonderful to see Chappell rewarded for his talent, especially at a time when he’s bringing Americans back together again — because it’s fun to make fun of one another.

While the globalists want us all to be the “same,” the reality is we’re different for a reason and that’s OK.

As Chappelle made his way to the stage to accept his award — the Mark Twain Prize for American Humor — he informed the audience members that he did not write a speech.

He spoke about defending freedom of speech when he was talking about comedians who he knows are “very racist.”

Here’s how USA Today [2] explained it all:

“(I) don’t get mad at ’em, don’t hate on ’em,” he said. “Man, it’s not that serious. The First Amendment is first for a reason. Second Amendment is just in case the first one doesn’t work out.”

The legendary comedian proceeded to give the speech while smoking a cigarette inside the building, acknowledging the fire marshal “for having the courage to let me be myself.”

“I want everyone in America right now to look at me. Look at me smoking indoors,” Chappelle said, to an audience including celebs such as Bradley Cooper, John Legend and rapper Common. “I didn’t ask anybody … What are they gonna do? Kick me out before I get the prize?”

Chappelle previously riffed on the Second Amendment during his Netflix comedy special “Sticks and Stones,” where he admitted he owns “several” guns.

During the special, he said (spoiler alert) that “personally” he “hates” guns and that he “can’t stand them.”

“But I have several. I don’t want them, but I feel like I need them,” he said, joking that Ohio, where he lives, is “an old Native-American word” that “means, literally, ‘Land of Poor White People.’”

He also added that school shootings were too prevalent and joked they could perhaps be stopped if lawmakers were inspired to pass gun control laws. (source: USA Today) [2]