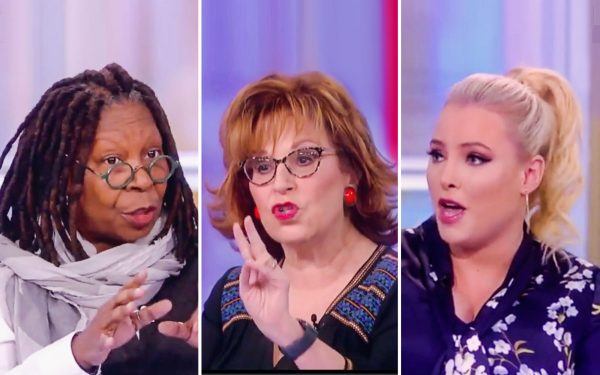 The co-hosts of “The View” just can’t seem to get along.

The show devolved into chaos on Tuesday during a discussion about an Army officer who is testifying about President Donald Trump’s July 25 phone call with the president of Ukraine.

Lt. Col. Alexander Vindman is testifying about Trump’s phone call from the White House (a transcript of which the president already released [1]).

Vindman is the highest-ranking Ukraine expert on the National Security Council.

Some people, including a panel on Monday night on the Fox News program “The Ingraham Angle,”  questioned whether or not Vindman is loyal to the United States.

“The View” co-host Meghan McCain took issue with that panel’s point of view, saying, “There is this trend in American politics where we are criticizing veterans.”

Behar and McCain then began a heated back-and-forth about what Clinton actually said and what she meant.

McCain finally yelled, “These are all soldiers who have fought and sacrificed and served for this country. We should not be questioning their loyalty!”

Behar interrupted, “Hold on a second. Just because somebody served does not ipso facto make them above reproach.”

Another round of strong commentary then erupted.

Finally, co-host Whoopi Goldberg attempted to intervene and bring back peace to the show.

She said to the audience, “[We] really do want to hear from everybody, but we’re starting to do that thing.”

McCain said she didn’t “know what that means, ‘this thing.'”

Goldberg responded, “It means you’re talking over each other.”

Goldberg then said in a scolding manner, “You know what? Let me tell you something about ‘The View.’ This show has always had the ability to have different points of view, which we respect around the table. And when we talk to each other, we also exhibit respect. So, when I’m saying to you, ‘Hold up,’ because we’re not hearing each other, I’m not trying to cut you off. I’m trying to get you heard.”

This piece originally appeared in the Objectivist [3] and is used by permission.