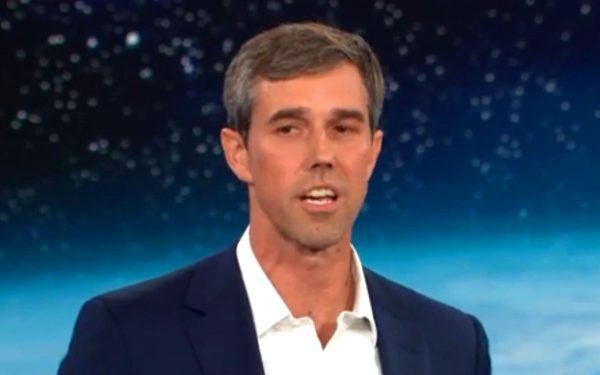 O’Rourke has been pursuing a drastic and radical anti-gun agenda, something that’s especially true ever since his campaign for the 2020 Democratic nomination began to founder.

He feels no one should be able to own or possess a “weapon of war,” such as an AR-15.

They’re sure not interested in getting expert opinions on the issue so that at least they wouldn’t sound so dumb. Or they could just surf on over to the NRA’s website [2] and glean a little info about guns that the civil rights organization has learned (and has been teaching) since 1871.

Let’s go through that point by point.

Red flag laws: Those are ripe for abuse and questionable due process.

Gun buy-back program: How can you buy back something you didn’t sell?

Isn’t it amazing how cavalierly this former congressman and his ilk view Americans’ constitutional rights?

Oh, wouldn’t that be great? The government would have with a list, then, of gun owners’ names and addresses — which makes things so convenient for tyrants, doesn’t it?

O’Rourke seems to have forgotten that we’re talking about a God-given, constitutional right here.

Oh, that’s right — Beto doesn’t care much for freedom of religion [4], either.

Leftists I know tell me it’s ridiculous to believe God gives people the right to own a gun.

Even some right-leaning people I know who support gun rights think it’s a stretch to say God gives people the right to a “thing.”

As is common with the Left, this view focuses too much on the thing itself and not enough on what the thing represents, which is the right to self-defense.

How do I know a firearm is the most efficient and practical means of self-defense? Because that’s what the city government issued me after I graduated from the police academy.

Why? Because criminals will always be able to get guns even if Beto takes mine away — so good luck with that.

Remarkably, after the recent Democrat debate in which O’Rourke said that cops wouldn’t go door-to-door, he then had a lapse in lying — and, addressing the topic of gun owners who fail to comply, told Joe Scarborough of “Morning Joe” his true plans.

“So, you know, in that case, I think there would be a visit by law enforcement to recover that firearm and to make sure that it is purchased, bought back, so that it cannot be potentially used against somebody else.”

This view is not only uninformed and ill-considered, it’s just plain stupid.

I wonder what gun confiscation looks like in this individual’s cartoon-world mind when he says, “If someone does not turn [in] an AR-15 or an AK-47, one of these weapons of war, or brings it out in public and brandishes it, in an attempt to intimidate … then that weapon will be taken from them. If they persist, there will be other consequences from law enforcement.”

What are you talking bout, Beto? Have you asked the cops about that plan?

This presidential wannabe’s comments are incoherent. For one thing, semi-automatic AR-15s and AK-47s are not “weapons of war,” which, again, is just plain stupid. And, Beto, here’s a news flash: It’s already illegal to brandish a firearm with the intent to intimidate.

Yes, in that case, the cops would take the weapon — because the person committed a crime.

I’ll never forget a quip by Drew Berquist, host of “The Drew Berquist Show” [7] and a former counter-terrorism officer. After discussing the Left’s plans for gun confiscation, he pretty much said, “Well, we have the guns — so good luck with that.”

This observation highlights what a lazy thinker Beto is on this issue.

Doesn’t the former congressman recall that America’s very first Revolutionary War battle against the British occurred over an attempted firearms confiscation? I suppose it’s not about whether he remembers or not; it’s about whether he cares. Obvious he doesn’t.

“There is a long history here of resistance to the taking of the people’s arms,” noted Stephen Gutkowski of the Washington Examiner recently. “It goes back to a thwarted effort by Gen. Thomas Gage, a redcoat, to  seize arms from the people of Concord [8] in 1775.”

America’s “gun culture” has long-established roots — and it is deep-seated.

O’Rourke is oblivious to the massive scope of what he seems to believe would be a simple endeavor.

Just look at much smaller-scale gun-related or firearms-related confiscation attempts abroad and at home. Look at New Zealand’s political overreaction to the atrocious murders of 51 people at a Christchurch mosque of March of this year [9], for example.

None of the law-abiding gun owners whom government authorities are now trying to disarm committed this violent anomaly in the otherwise low-crime country.

A sick and twisted outlaw killed those poor people.

By definition, outlaws do not obey laws — gun confiscation or otherwise.