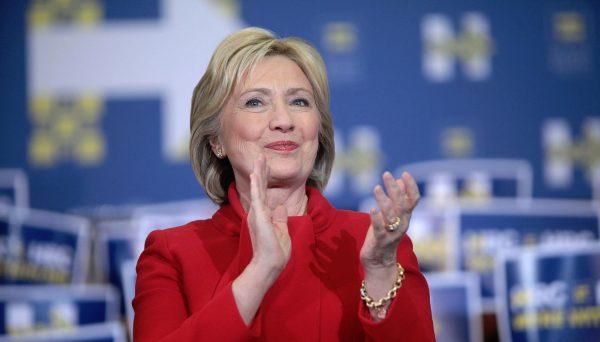 An audio recording released by The Blaze [1] appears to indicate that a Ukraine official admitted to working with the Democratic National Committee (DNC) to aide Hillary Clinton’s campaign in 2016.

The recording reveals Artem Sytnyk, director of the National Anti-Corruption Bureau of Ukraine, stating that he tried to sabotage the campaign of Donald Trump in an effort to boost Clinton.

The Blaze reports on coverage in the Ukrainian media in which Sytnyk, who eventually “was tried and convicted in Ukraine for interfering in the U.S. presidential election in 2016,” has his desire to “help Hillary” explicitly stated.

“I don’t know how, but the Americans got an audio recording of Mr. Sytnik’s conversation,” Ukrainian state prosecutor Yuriy Lutsenko is reported as saying.

“He is resting with his family and friends and discussing how he would like to help Hillary.”

Blaze TV host Glenn Beck then plays audio in which Sytnik can be heard saying he helped Hillary Clinton — along with explanations as to why.

“Yep. I helped him, too. Not him, but Hillary. I helped her,” Sytnik says.

Boosting the Clinton campaign, he explains, is “for us … sort of … better,” while “for the Americans … what Trump is doing is better for them.”

“I don’t know how, but the Americans got an audio recording of Mr. Sytnik’s conversation: He is resting with his family & friends & discussing how he would like to help Hillary.”@glennbeck [2] reveals the Ukraine transcript the media isn’t talking about.https://t.co/fZHzqMCZbV [3] pic.twitter.com/9jyMLVwdEB [4]

The Blaze notes that the recording was leaked to Ukrainian media in October of 2017, but nobody in the mainstream media in America picked it up — willfully, perhaps, or otherwise.

This past May, The Political Insider reported that the Ukrainian Embassy in Washington launched claims that an operative in the DNC sought dirt in 2016 on then-candidate Donald Trump.

Related: Romney Running Against Trump in 2020 in Primary? [6]

Ukrainian Ambassador Valeriy Chaly’s office provided written answers that revealed that Alexandra Chalupa, a DNC contractor, sought information on Paul Manafort [7]; information she hoped to use to expose Manafort’s links to the country during the campaign, forcing the issue to be brought forward to Congress.

Ambassador Chaly said, “The embassy considered her requests an inappropriate solicitation of interference in the U.S. election.”

“Ukraine’s embassy in Washington says a Democratic National Committee insider during the 2016 election solicited dirt on @realDonaldTrump [8]‘s campaign chairman and even tried to enlist the country’s president to help.” https://t.co/nZjpyj3xq0 [9]

John Solomon of The Hill [11] at the time wrote that this was the “most direct acknowledgment by Ukraine’s government that an American tied to the Democratic Party sought the country’s help in the 2016 election.”

That is — until Beck released this new information.

The Blaze also included an email in its release between Chalupa and Louise Miranda at the DNC.

Hey, a lot coming down the pipe. I spoke to a delegation of 68 investigative journalists from Ukraine last night at the Library of Congress, the Open World Society forum. They put me on the program to speak specifically about Paul Manafort. I invited Michael Isikoff, who I’ve been working with for the past few weeks, and connected him to the Ukrainians. More offline tomorrow, since there was a big Trump component you and Lauren need to be aware of that will hit in the next few weeks. Something I’m working on that you should be aware of.

Politico noted in 2017 [12] that Chalupa had “worked in the White House Office of Public Liaison during the Clinton administration” and then “went on to work as a staffer, then as a consultant, for Democratic National Committee.”

“Donald Trump wasn’t the only presidential candidate whose campaign was boosted by officials of a former Soviet bloc country,” the Politico report reads.

.@glennbeck [2] does a spot-on impression of the media covering the Ukraine scandal wearing Trump-goggles.

“Nothing to see here…”

If you missed the Ukraine special, it’s up on YouTube now: https://t.co/hM6QqKugaU [13] pic.twitter.com/USY6xwNUJt [14]

“So here he [Sytnyk] is. He is admitting to tampering with our elections. Admitted working with the Hillary Clinton campaign,” Beck said while presenting the new evidence.

“He is actually convicted in the highest court in the land in Ukraine. This is all front-page news in Ukraine, while we are saying, ‘Was there anyone tampering with the election?'” Beck said with exasperation.

Hillary Clinton recently claimed President Trump’s July 25 phone call asking Ukraine to investigate corruption in that country showed that he “betrayed our country” and represents a “clear and present danger.”

If that is the case, what does this new evidence — along with the fact that Clinton paid for the discredited Steele dossier and top party officials [16] tried to get Ukraine to cough up dirt on Trump — say about them?