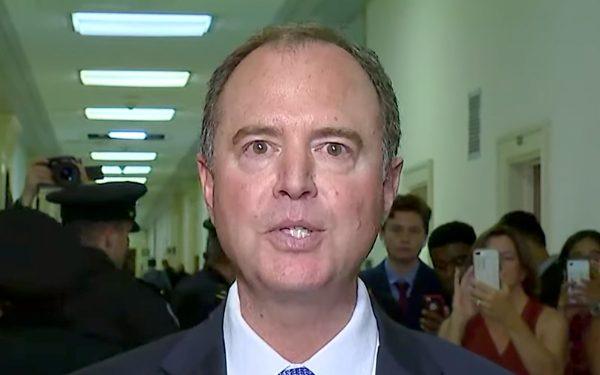 The movement to condemn House Intelligence Committee Chairman Adam Schiff (D-Calif.) for making up a “parody” version of a phone conversation President Donald Trump had with Ukrainian President Volodymyr Zelensky in July just got stronger — as 45 Republicans have signed on to a resolution.

Biggs said [2] it was “inexcusable” of Schiff to “mislead the American public with such a statement.”

“Although a public list of cosponsors only shows 18 Republicans supporting the resolution, an internal GOP list obtained by Breitbart News shows that 45 Republicans have joined the list of GOP lawmakers to condemn Schiff,” Breitbart reported.

The outlet went on to note, “This represents a growing movement of Republicans to fight back against House Speaker Nancy Pelosi’s (D-Calif.) and Democrats’ move to impeach Trump.”

Related: Trump to ‘Dare’ Pelosi to Hold an Impeachment Inquiry Vote Against Him  [3]

Here is the list of 45 Republicans making this move against Schiff, as reported by Breitbart News: [4]

Schiff’s misrepresentation of the conversation between Trump and Zelensky sparked widespread backlash‚ and despite Democrats’ defenses of the congressman, the duplicity of his tactics were evident to many.

Rep. Fred Keller (R-Pa.) announced on Thursday that he was joining this growing list of Republicans (he’s shown as number 36 on the list above).

Keller said Schiff has led a “rigged political witch hunt” and that he must be held accountable [5].

“We now know what we’ve suspected all along: The ‘impeachment inquiry’ being undertaken by Speaker Pelosi, Chairman Schiff, and the socialist House Democrats is nothing short of a rigged political witch hunt that seeks to delegitimize our duly-elected president,” Keller said.

“Chairman Schiff has made a mockery of this solemn process and the Democrats leading the impeachment charge [5] have strayed far afield of the constitutional impeachment parameters,” the conservative lawmaker also said.

“Their continued pursuit of impeachment is wrong, the nonsense must stop, and Chairman Schiff should be held accountable for his actions both prior to the committee’s hearing last week as well as during,” Keller added. “It’s time to stop with the litigating and investigating and return to legislating for the benefit of the American people.

“Chairman Adam Schiff has been lying to the American people for years. Now he is so desperate to damage the president that he literally made up a false version of a phone call,” McCarthy wrote on Twitter on Wednesday.

Chairman Adam Schiff has been lying to the American people for years. Now he is so desperate to damage the president that he literally made up a false version of a phone call.

Enough is enough. I have signed a resolution to censure Schiff in the House of Representatives.

“He has no credibility to be a chairman,” McCarthy also said on Fox News’ “The Ingraham Angle” this week.

“He has no right to be the prosecutor in this case,” McCarthy added.

Read more at ThePoliticalInsider.com:
Steve Bannon: Hillary Clinton Is Going to Run Again in 2020 [8]
Juanita Broaddrick Slams Hillary for Saying Women Groped by Biden Need to ‘Get Over It’ [9]
Hillary Clinton Urges Trump Officials Involved in Impeachment Inquiry to ‘Tell the Truth’ [10]