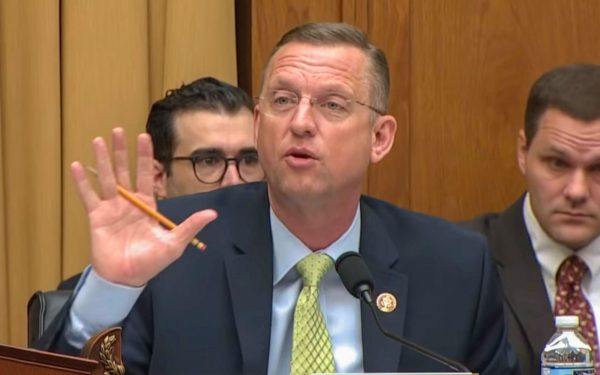 Ranking Member Doug Collins (R-Ga.) went after Chairman Jerry Nadler (D-N.Y.) over discrepancies with red flag law ideas and due process, which he found in the legislation.

Red flag laws do not align with civil liberties or due process.

And that was Collins’ agenda, to explain why the legislation was not what they all thought it was.

#HR1236 [1] is so flawed that anyone committed to our Constitution can’t seriously consider it. Why my Democrat colleagues are so eager to abandon the bedrock of our constitutional freedoms and due process is beyond me. pic.twitter.com/l1JnIhbYzz [2]

Check out this transcript below from the video in the following seven paragraphs — and see exactly what I mean about “epic opening statement”:

Collins: “Mr. Chairman, thank you again for holding this markup today. Like you, I am concerned about addressing this important issue, addressing the issue of mass shootings to combating the discouraging laws plaguing our urban communities. I stand ready to work with you on sensible solutions that will, that could actually prevent, these atrocities. What I am not willing to do is support legislation that will not do anything to make us safer and will simultaneously infringe on the rights and liberties guaranteed by our Constitution. Unfortunately, all three of the bills we’re considering today will do just that. First, we’ll be considering HR1236, the Extreme Risk Protection Order Act of 2019. While this bill may seem like a common sense measure, it’s flawed in far too many ways to be worthy of this Committee’s support.”

“Five months ago in an interview, one of the statements given by the chairman, and you said this to one of your hometown papers: ‘My original motive in politics, from the time I was probably 12 years old, was civil rights, civil liberties and due process, and I’ve always concentrated on them and that’s why I’ve never changed,'” Collins quoted.

“Well, I’m not sure what’s changed but the bill before us today has some serious due process problems. Namely, the bill allows for confiscation of individuals’ firearms without notice or without an opportunity to be heard,” Collins explained. “Even more egregious is the fact that ex-parte determination can be determined when a judge finds there’s a ‘reasonable cause’ to believe the individual possesses a danger to himself or others [while] having access to a firearm. ‘Reasonable cause’ isn’t even ‘probably cause.’ It’s certainly less than clear and convincing evidence. Do we really want to surrender Americans’ constitutional rights to such a low standard without giving those citizens notice or an opportunity to be heard? What other rights are we willing to sacrifice in this manner?”

“If the effects of this bill continue to emerge, once the court finds the person too dangerous to possess a firearm, what does the bill indicate the court should do? Does it provide for some sort of incapacitation, attention, evaluation, or a provision of mental health services?” Collins asked. “No. In fact, the bill is silent. It does not address the person’s possible illnesses or instabilities, even though the court has just determined him or her dangerous enough to be stripped of a fundamental constitutional right.”

“I suppose we should all hope and pray such dangerous individuals don’t have access to any other things that would allow them to harm themselves. If they do, then this is sort of a waste of time,” Collins added bluntly. “HR1236 allows a person to petition to take away any other person’s Second Amendment rights with a court order. There is no required nexus between the parties. You don’t even have to know each other. In light of that, it’s unthinkable that this bill doesn’t require law enforcement officer to independently substantiate the claims and there are no penalties for making a false claim against anyone.”

“These are just a few of the myriad of problems found in this bill. I’ve seen and heard statements from some of my Republican colleagues indicating that we’d be willing to consider red flag legislation. Unfortunately, the proposal today is so flawed that not anyone committed to looking into the errors we have just laid out would be supportive of that. I have said this before. There are ways that we have worked together in the past. This is not one of those.”

After reading Collins’ statement, you’ll see why I say that Democrats have done a lot more than just “peacock around”; they’ve been actively engaged in subverting America.

This is why I’m so glad someone like Rep. Doug Collins of Georgia is holding them accountable for their lunacy and idiocy.

Setting aside for a moment their coup attempt to undermine the president and the Constitution — their opposition to securing our borders, their subversion of immigration law, their attacks on law enforcement and their resistance to defending America’s sovereignty are all examples of how they hate our country.

I once thought compromises were reasonable on gun-related matters.

These Democrats could care less about protecting people, as I see it. They are only interested in depriving people of their constitutional rights for political reasons.

Most of the members of the Democrat Party worship at the altar of the all-powerful state.

Their agenda is socialism. Has there ever been a socialist government that didn’t do its best to disarm citizens to render them defenseless against their oppressive government?

I once thought compromises were reasonable on gun-related matters. I’ve come to realize that the Left will never be happy with any compromise and will view it as a sign of weakness on our part and an invitation to take some more.

Therefore, I’m unwilling to accept any compromise with the Left on anything to do with gun control.

These individuals won’t be happy until they’ve taken our guns and left us defenseless.

Read more at WayneDupree.com:
Watch: Walmart Just Confronted a ‘Good Guy with a Gun’ and Banned Him for Life [6]
While the NFL Continues to Crash and Burn, Tom Brady and the Patriots Soar [7]
8-1/2 Month Pregnant Migrant Crossed U.S. Border to Give Birth and Border Patrol Sent Her Back [8]