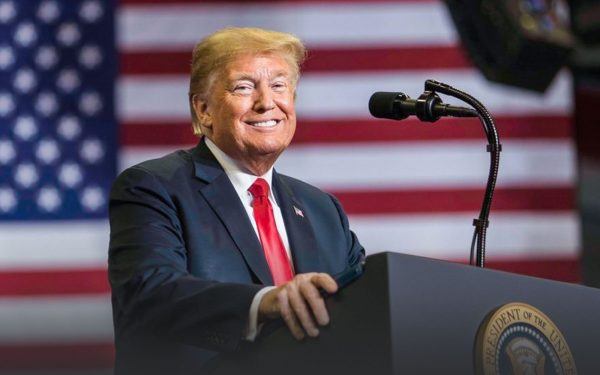 President Donald Trump, at the United Nations General Assembly on Tuesday morning [1], ripped into open-border proponents for advocating for what he called an “evil” agenda under the “cloak” of social justice — all while warning Iran to abandon its confrontational course of action.

The president also took on China [2] vis-a-vis the ongoing trade war. “For decades, the international trading system has been easily exploited by nations acting in very bad faith,” he said on that subject. “As jobs were outsourced, a small handful grew wealthy at the expense of the middle class.”

The president delivered “arguably his most robust defense yet of his nationalist philosophy,” noted Fox News [3] in an analysis.

“Today, I have a message for those open-border activists who cloak themselves in the rhetoric of social justice: Your policies are not just. Your policies are cruel and evil,” said Trump, accusing people of promoting human smuggling and the “erasure of national borders.”

“You are empowering criminal organizations that prey on innocent men, women and children. You put your own false sense of virtue before the lives and well-being of countless innocent people,” he also said. “When you undermine border security, you are undermining human rights and human dignity.”

He delivered a broader message defending border security, both in the U.S. and around the world.

He also railed against globalism and “globalists” in front of the United Nations — a “world body increasingly known for espousing that approach,” as Fox News and other outlets pointed out.

Instead, he promoted patriots.

“If you want freedom, take pride in your country,” Trump also said. “If you want democracy, hold onto your sovereignty. And if you want peace, love your nation.”

PRESIDENT TRUMP AT THE UN:

Today we will see a stark contrast:

LEADERSHIP –> @realDonaldTrump [6] at #UNGA [7]: "If you want freedom, take pride in your country. If you want democracy, hold on to your sovereignty. If you want peace, love your nation."

RIDICULOUSNESS –> @SpeakerPelosi [8] and Dems on the Hill

“The president’s tone was steady and somber. But the message was that of a muscular nationalism that he has spent the better part of three years defining. As part of his speech, he later ripped into social media giants, media groups and academics — whom he accused of being part of a ‘permanent political class’ that sought to undermine the will of the people,” noted the Fox News [3] piece.

“Wise leaders always put the good of their own people and their country first. The future does not belong to globalists, the future belongs to patriots,” Trump said earlier on in the speech. “The future belongs to sovereign and independent nations who protect their citizens, respect their neighbors, and honor the differences that make each country special and unique.”

He also talked about “national renewal.”

And Trump advised other member states, “If you want freedom, take pride in your country. If you want democracy, hold on to your sovereignty. If you want peace, love your nation.”