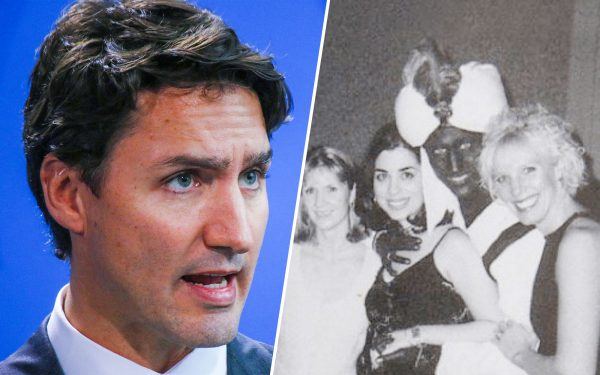 Canadian Prime Minister Justin Trudeau apologized on Wednesday night shortly after a controversial photo of him from back in 2001 — shown above right — surfaced in a Time magazine report.

The picture in question shows Trudeau wearing brownface makeup at an “Arabian Nights” party at the private school at which he was teaching at the time.

“I should have known better, but I didn’t,” Trudeau told media members late Wednesday night.

“I deeply regret that I did that. I should have known better.”

“I didn’t think it was a racist action at the time,” he added, “but now we know better, and this was something that was unacceptable — and, yes, racist.”

The photo in question shows Trudeau, then 29 years old — he’s the son of the late former Prime Minister Pierre Trudeau — donning a white turban and robes.

He has an arm draped around the neck of a woman; the other arm is grabbing her hand.

Trudeau’s face, neck and hands were all darkened significantly, as the photo clearly shows.

Here’s the photo below, as captured by Time in a tweet — and right below that, his explanation and apology.

Justin Trudeau apologized for wearing brownface at a 2001 "Arabian Nights"-themed party following TIME report: "I shouldn't have done that. I should have known better but I didn't and I'm really sorry" https://t.co/1ppUHVfubP [3] pic.twitter.com/IFyGMQcD5O [4]

The photograph is from the 2000-01 yearbook of the private day school at which Trudeau was teaching, West Point Grey Academy, as Fox News [6] and other outlets reported late on Wednesday.

Michael Adamson, a Vancouver businessman, is the one who gave the photo to Time.

He was a member of the West Point Grey Academy community, though he did not attend the party in question. Faculty, staff and students’ parents were all present at the event, according to reports.

“He came across the photograph in July and felt it should be made public,” Fox News noted.

Trudeau, the current leader of the Liberal Party in Canada, is in the midst of a re-election campaign.

On Wednesday, “Conservative Party leader Andrew Scheer, whose party holds the second-highest number of seats in the House of Common, gave a brief on-camera statement, saying Trudeau ‘was not fit to govern,'” ABC News [7] reported.

“Like all Canadians, I was extremely shocked and disappointed when I learned of Justin Trudeau’s actions this evening,” Scheer said, the same outlet reported. “Wearing brownface is an act of open mockery and racism. It was just as racist in 2001 as it is in 2019.”

Since the first brownface image first surfaced, two others very much like those have surfaced of Trudeau as well.

See these tweets — and share your thoughts on this story.

Canadian Prime Minister Justin Trudeau is apologizing after photos surfaced of him wearing brownface makeup at a 2001 costume party.https://t.co/9IEFIy0qJy [8]

A second ‘blackface’ photograph of Justin Trudeau has emerged showing the Canadian Prime Minister dressed as a black man during his performance of ‘Day-O’.

This story only gets funnier.https://t.co/ziePTU0TaB [10]

Justin Trudeau dressed up in blackface. Ok. So did tens of thousands of other people before you decided it was the unpardonable sin. Remember when we could have fun and laugh at each other?

#ITV [13] deleted this tweet and re-posted it when I retweeted it earlier with a comment, so here is my comment again:
In a sane world, Trudeau would have nothing to apologise for, as he did nothing wrong, but this is no longer a sane world. https://t.co/0C1RT2ktBi [14]