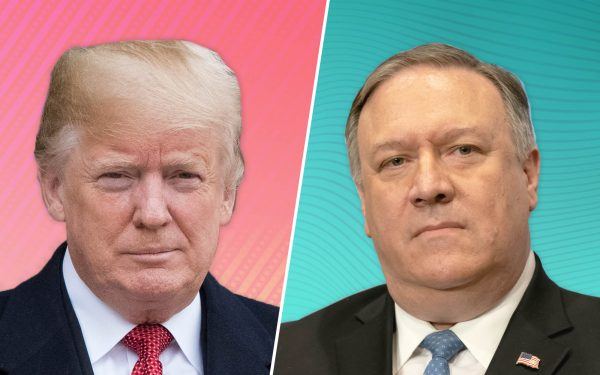 Speaking on Sunday morning to anchor Chris Wallace of “Fox News Sunday,” [1] Secretary of State Mike Pompeo [2] provided further context for the tweet sent out on Saturday night by President Donald Trump that he had “called off” a secret meeting with the Taliban scheduled for Sunday at Camp David.

The meeting’s goal was “peace talks … negotiations with the Taliban.”

“Where does that leave the plan to begin to pull U.S. troops out of Afghanistan?” Wallace asked Pompeo at the start.

“Well, Chris, remember the principles: President Trump has made clear he wants to reduce risks to Americans,” replied Pompeo. “You showed the pictures last night from the dignified transfer [of] the remains of Sergeant First Class Barreto. I was out there with his family. It’s a reminder to all of us of the enormous costs and sacrifice these [American] heroes make for us each and every day. President Trump is trying to reduce that risk.”

“At the same time, he’s committed to making sure that we reduce the risk that terror should ever strike the United States from Afghanistan again.”

Related: Four Americans Are Killed in Afghanistan — Three of Them Military [3]

“And so, we’ve been working for months for a peace and reconciliation deal,” Pompeo also noted. “We’ve been working with the Afghan government, working with other Afghan leaders, been working with the Taliban to try and reduce the level of violence to commence — and you would know this, Chris, we’ve been trying to get the Afghans to talk to each other, this basic idea for almost two decades now, and we had their — the Taliban’s commitment to do that. We had their commitment to break from al-Qaida publicly, and they would obviously have to deliver on that commitment. So we’ve made real progress.”

“But in the end, the Taliban overreached. They forgot that America is always going to protect its interests. The commander, the commander of Resolute Support and the NATO forces — they are still at this hard. We killed over a thousand Taliban just in the last 10 days.”

“And while this isn’t a war of attrition, the American people should know we will continue to apply the appropriate pressure to make sure that we’re never struck with terror again from Afghanistan.”

Related: Omar of Minnesota on the 9/11 Attacks: ‘Some People Did Something’ [4]

Wallace asked if the talks were “now dead” and what it might take to restart them.

“For the time being they are,” replied Pompeo. “We’ve recalled Ambassador [Zalmay] Khalilzad to come back to Washington so that we can begin to think about how we would chart the path forward … although the president hasn’t made a final decision. But what they did here was they tried to use terror to improve their negotiating position. And I think anyone who has observed President Trump knows, whether it was in Hanoi with North Korea [5] or whether it’s been in how we responded when the Chinese reneged on their commitment in the trade deal [6], if in the course of a conversation, where we’re trying to improve both teams’ outcomes through a negotiated solution, if the other team commits an act that’s inconsistent with that, President Trump is not going to take that deal. He’s not going to take a bad deal.”

Added Pompeo, “We’re looking for more than words on paper. We’re looking for real, delivered commitment — and the Taliban demonstrated either that they weren’t willing to or couldn’t live up to the commitment they needed to make to reduce violence there.”

“So the talks are off indefinitely?” Wallace pushed.

“I hope we get them started back,” Pompeo responded. “It will ultimately be up to the Taliban. They have got to demonstrate that they’re prepared to do the things that we ask them to do in the course of those negotiations.”

Wallace pressed him on an ominous statement apparently just released by the Taliban.

“A lot of people bluster, Chris,” said Pompeo. “Cooler heads, I hope, will prevail,” he added. “I didn’t see the full statement. I don’t know its context. I don’t know precisely who issued with this. It’s the case that the Taliban is not monolithic.”

Wallace replied, “They said Americans will suffer more than anyone else and that this will result in the death of more American troops [3].”

“I hope that’s not the case,” noted Pompeo. “We don’t want any loss of American life. Know this: Know that our Department of Defense and General Miller have the full authority to do what they need to do to protect American soldiers, sailors, Air Force folks working in the area, and do everything they need to do to prevent a terror attack from ever coming back to the United States as it did now almost 18 years ago.”

Related: The Three Films That Best Honor Those Who Were Lost on 9/11 [7]

“We know the history of Camp David,” responded Pompeo. “We reflected on that as we were thinking about how to deliver for the American people. And so, as we considered the right path forward — your point about an agreement in principle, I think that’s true. We weren’t complete — [there were] still lots of implementation issues, lots of technical issues that needed to be worked on even though we’ve been doing this for months.”

“Lots of bad folks have come through that place,” said Pompeo.

He added, “President Trump ultimately made the decision. He said, ‘I want to talk to President Ghani. I want to talk to these Taliban negotiators. I want to look them in the eye. I want to see if we can get to the final outcome that we needed so that we could sign off on that deal.’ So we found that arrangement acceptable, that the verification was adequate, and we concluded this was a perfectly appropriate place.”

Pompeo also said, “You know the history of Camp David. Lots of bad folks have come through that place. There have been lots of peace negotiations taking place. It’s almost always the case, Chris, that you don’t get to negotiate with good guys. The reason you’re in negotiations to end wars, to end conflicts, to end violence, to reduce risk to the American people, is almost always because the person across the table from you isn’t exactly the finest.”

Unbeknownst to almost everyone, the major Taliban leaders and, separately, the President of Afghanistan, were going to secretly meet with me at Camp David on Sunday. They were coming to the United States tonight. Unfortunately, in order to build false leverage, they admitted to..

….an attack in Kabul that killed one of our great great soldiers, and 11 other people. I immediately cancelled the meeting and called off peace negotiations. What kind of people would kill so many in order to seemingly strengthen their bargaining position? They didn’t, they….

….only made it worse! If they cannot agree to a ceasefire during these very important peace talks, and would even kill 12 innocent people, then they probably don’t have the power to negotiate a meaningful agreement anyway. How many more decades are they willing to fight?

Way to go Mr. Pompeo!You hit people like chris wallace with the truth,that'll shut him up or make him move on in a hurry. He's about as fair and balanced as satan!

JUST IN: Taliban says US lives will be lost because of Trump's decision to call off peace talkshttps://t.co/48glQk19Ff [16] pic.twitter.com/NGkk9TREwl [17]