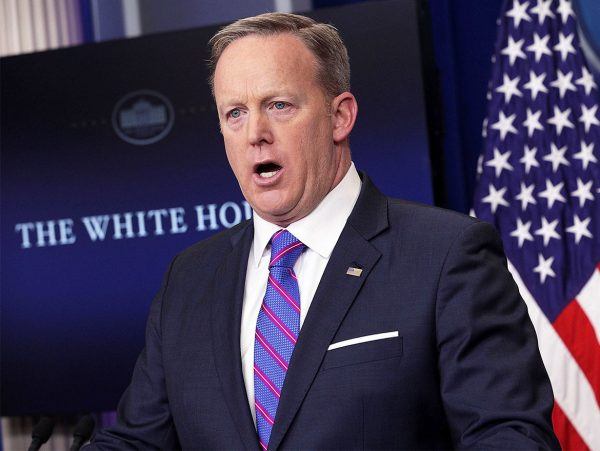 We have a mental health crisis in this country.

It’s called Trump Derangement Syndrome — and, as I see it, it turns otherwise mild-mannered people into, well, something else entirely.

America is now filled with grown adults [1] who actually believe that those who voted for President Donald Trump in 2016 are part of the rebooted Third Reich.

These same people also believe that Russia is literally controlling our elections — and that the Russians somehow “placed” Trump in the White House.

That’s how detached some individuals are from reality.

One of these actually folks stormed the stage at a Thursday night conference at which Sean Spicier was speaking.

The man screamed about “Nazis” for a bit — before cops tackled and removed him.

“Moments after the event moderator walked out onto the stage,” the outlet also noted, “even before Spicer and Brazile had been introduced, a man from the audience rushed the stage and shouted what sounded like ‘shut it down.’ He was promptly apprehended by four police officers as he continued to shout mostly unintelligible phrases. However, just before police removed him from the stage, he shouted what sounded like, ‘***ing Nazis.'”

The man also yelled other obscenities.

“Roughly five minutes into the event, chants from protesters outside the room grew louder, which the moderator called ‘a sign of health … where people can be yelling in protest and at the same time we have the ability to have a robust but civil conversation.'”

Watch the incident in the Campus Reform video below:

A version of this piece originally appeared in WayneDupree.com; [3] this article  is used by permission.