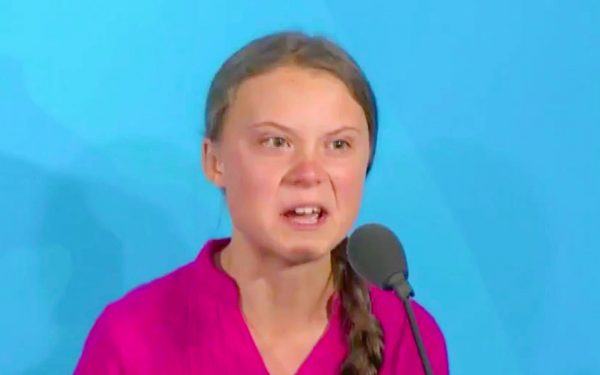 If you have a social, political or even moral issue that you want to push effectively, here’s the sad answer today: Exploit a child.

That’s exactly what happened to young Greta Thunberg [1], in my view, when she was placed in front of the United Nations this week in order to advance the social agenda that wants to reverse climate change across the globe.

Unfortunately, it probably worked with some who listened.

Here’s the saddest part of the entire event: The young teen will suffer more than most who listened. Her voice shook with a mixture of fear, anger and anguish as she passionately told her audience that her future had been ruined by a bunch of greedy, selfish adults in the generation that preceded her.

Furthermore, as she strategically shamed a room full of adults, she fed into every child’s fear of his or her own future.

Related: Climate-Change Rant by Young Girl Has People Asking About Her Parents [1]

Let’s be clear about one thing. Greta Thunberg didn’t get in front of the U.N. on her own. Neither did she conjure up even basic knowledge of climate change on her own. Adults did.

They realized that in order to motivate others to action, they needed to place a distressed child in front of them.

Seeing her fear and sadness would cause anyone to do whatever they could to help her.

They played a trick on the goodness of humanity.

Who were those adults? They were ones with a social, political or even moral agenda.

Her parents, of course, sanctioned her appearance for who knows what reason. Notoriety? To get their agenda out about climate change?

To each and every adult responsible for allowing Greta Thunberg to speak: Shame on you, I say.

The 16-year-girl from Sweden went before the U.N. and reprimanded adults in the audience for their part in ruining her life — not because she had extensive knowledge of the subject, but because she was very good at parroting her parents’ and teachers’ beliefs.

Adults essentially threw this girl under the bus in order to advance a political agenda.

Look at just these two tweets for how some people framed this, too:

I find Greta Thunberg's speech extraordinarily difficult to watch. I suppose everybody does. I wonder if the people who make the bizarre decision to attack her realise how obvious it is to everybody else that they are motivated by self-loathing and guilt?

'How dare you – you have stolen my dreams and my childhood'

As a pediatrician who has a seen hundreds of kids struggle with anxiety and depression at alarmingly high rates, young Greta’s address further fueled kids’ feelings that they should be anxious, too. After all, their futures have been destroyed — she told them that.

Our job as adults is to quell our children’s fears — not to allow their anxiety to be worsened.

Kids have plenty to be anxious about in today’s world. They feel pressure to excel academically, athletically, to figure out at an early age whether they are a boy or girl,to  understand their sexual orientation, fight against bullies, avoid drinking, having sex or using drugs, etc. They live frenetic lives with minimal downtime — and they rarely see their parents because they’re so busy doing wonderful things.

I was a child during the Cuban missile crisis. My family lived in Washington, D.C, and while I rehearsed bomb drills in school, I was excited to go for a trip to Boston for the week when President John F. Kennedy negotiated our way out of a disastrous event.

But it was only as an adult that I realized the seriousness of the situation and the reason for our sudden trip to Boston. My parents were doing their best to keep us away from harm by a launched missile. They took charge of a dealing with such a serious event — and kept fear away from us kids.

Let them be children. Let’s not dump adult problems on their shoulders — because in doing so, we directly contribute to harming their mental health.

When adults realize that big issues like climate change belong to adults — not kids — then we will do something constructive to help diminish our kids’ anxieties.

Addressing the U.N. about such a divisive, complex and polarizing problem is not a child’s job. It is an adult’s job. When did Americans decide it was OK for children to take over adults’ problems? When they decided to manipulate the public, that’s when.

Related: ‘Give Comfort and Empathy to Any Child Who Needs It’ [6]

Kids need our help, not exploitation. When we are willing to make the acute rise of mental health issues in kids a real priority and care for them as they deserve to be cared for, we will stop brainwashing them into being our mouthpieces.

Let them be children. Let’s not dump adult problems on their shoulders — because in doing so, we directly contribute to harming their mental health.

If we want to diminish the rise of anxiety in kids of all ages, let’s stop this nonsense.