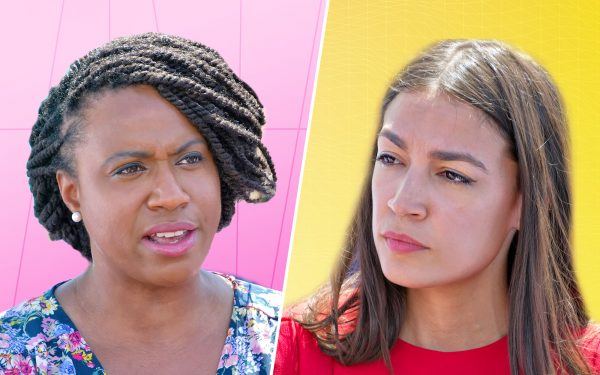 Rep. Alexandria Ocasio-Cortez (D-N.Y.) [1] (shown above right) blasted a “Straight Pride” parade held in Boston, Massachusetts, on Saturday and what she said appeared to be a lack of women attendees at the event.

AOC called the event instead an “I-Struggle-With-Masculinity” parade.

“For men who are allegedly so ‘proud’ of being straight, they seem to show real incompetence at attracting women to their event,” the Democratic squad member from New York wrote along with a retweet of video from the march this weekend.

“Seems more like a ‘I-Struggle-With-Masculinity’ parade to me,'” she said.

For men who are allegedly so “proud” of being straight, they seem to show real incompetence at attracting women to their event.

Seems more like a “I-Struggle-With-Masculinity” parade to me. 🤷🏽‍♀️

Rep. Ayanna Pressley (D-Mass.) (above left) — another member of the so-called Democratic squad — also condemned the event, calling it a “hate march.”

Pressley said in a statement, “TY to the allies & accomplices who stood in the gap & laid their bodies on the line today in affront #LGBT hate march,” she said in a statement on Saturday. “To everyone feeling unseen & vulnerable today … we got you. Equitable outrage. Our destinies & freedoms are tied.”

One has to ask: What happened to tolerance for all people, no matter their point of view, their background, their beliefs or their orientation?

The counter-protests Pressley alluded to led to the injuries of some police officers — as well as almost three dozen arrests, as Fox News [5] reported.

"Straight Pride Parade" in Boston draws as many counterprotesters as marchers in addition to a heavy police presence. https://t.co/a0cPOkeVvT [6]

The rally held in Boston’s downtown area led to a clash between Super Happy Fun America, the group that organized the parade, and protesters who blasted the event as homophobic, Fox News also noted.

Some 200 people marched in the parade to celebrate traditional families and defend heterosexuality, as the Boston Globe [8] reported.

But the counter-protesters were out in full force.

Parade participants held up signs with pro-military and pro-Trump messages — including “Support our troops” and “Build the wall and crime will fall,” according to local FOX affiliate WDAF-TV [9].