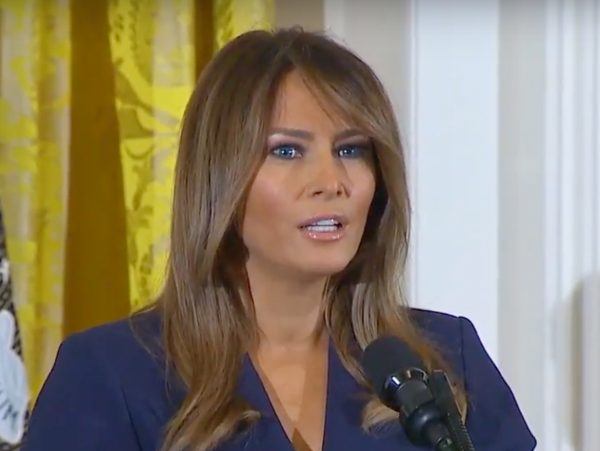 President Donald Trump hosted a state dinner in honor of Scott Morrison, the Australian prime minister, on Friday night at the White House [1] during Morrison’s visit to the United States this week.

Morrison is only the second world leader to be hosted by Trump at a state dinner during his presidency (France’s Emmanuel Macron was the first — in April of 2018).

Morrison, along with his wife Jenny Morrison, were guests of Mr. and Mrs. Trump for the dinner in the Rose Garden.

To welcome the Morrisons, Mrs. Trump wore “an icy blue crepe knit dress by Scanlan Theodore, the Aussie brand founded in Melbourne in 1987,” as Breitbart [2] noted.

Melania Trump Is Shades of Cool for U.S.-Australia State Dinner https://t.co/sXNAuyUAap [6] via @JxhnBinder [7] at @BreitbartNews [8]

.@realDonaldTrump [11] with @FLOTUS [12] with Prime Minister of Australia Scott Morrison as they arrive for the Official State Dinner in the Rose Garden of the White House. #WhiteHouse [17] pic.twitter.com/wNzgB5cJcD [18]

Few women, however, could wear it with the elegance and taste of Melania Trump.

Then, for the dinner itself, held outdoors — yes, the rain held off! — the first lady wore an aqua-colored chiffon dress designed by the New York-based Gilles Mendel, the creative force behind the J. Mendel label, as WWD [21] pointed out.

“With wave-like effects in the chiffon, the flowy creation was in step with the Rose Garden setting. Instead of welcoming guests to the State Dining Room in the White House, the first couple welcomed guests al fresco.”

To pair with the dress, the first lady wore patent leather heels from Christian Louboutin, the same outlet reported.

Not to be forgotten, “the prime minister’s wife wore a navy column dress with velour and sequins from Australian designer Carla Zampatti — who also created the black ensemble she wore for the official welcome earlier in the day.”

So why does Melania Trump’s appearance, fashion and couture matter in any way to hardworking and patriotic Americans all across our country?

This matters because Mrs. Trump is relentlessly and unfairly attacked almost daily by members of the liberal press, no matter what she does — as well as by liberals and Democrats of all walks of life.

She so rarely gets the credit she deserves for her flawless representation of our country as first lady of the United States.

She deserves at least a moment, a pause, a bit of attention for her care, her work, her great respect for the people of this country and our country as a whole — and for her Be Best initiative [23] for the health and well-being of our young people as well, an effort she unveiled last spring and has worked on since then.

By the way, WWD also noted that “as a hint of bipartisanship, the dinner service [was to] consist of alternating china settings from the administrations of Presidents Bill Clinton and George W. Bush.” Will that get any wide attention, either?

See these thoughts and images below — and share your thoughts.

I want to express my gratitude to America’s magnificent @FLOTUS [12] for tonight’s exquisite evening where we celebrated more than a century of loyal and devoted friendship between🇺🇸🇦🇺Both of our nations are blessed by uncommon courage, unfailing commitment, and unyielding character! pic.twitter.com/i61cHCZYlD [24]

It's so good to have a first lady with class, elegance, and inner beauty that shows on her face!!
Such a breath of fresh air after the previous fake thing we had to call first lady!!