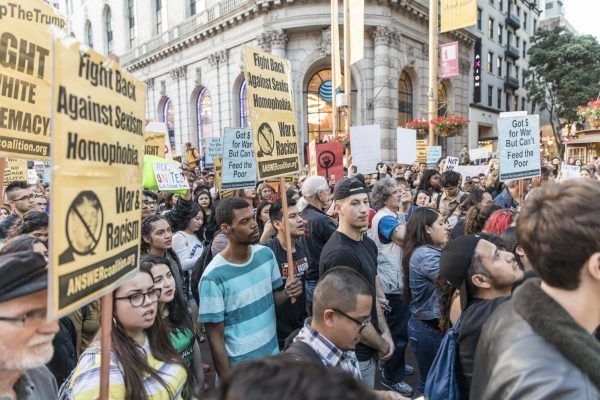 The San Francisco Board of Supervisors voted to approve a resolution [1] on Tuesday that declares the National Rifle Association (NRA) a “domestic terrorist organization.”

District 2 Supervisor Catherine Stefani, who penned the resolution, said, “The NRA has it coming to them, and I will do everything that I possibly can to call them out on what they are, which is a domestic terrorist organization.”

The declaration from the board — which consists exclusively of Democrats — cites a duty by elected officials to “support and defend the Constitution of the United States against all enemies, foreign and domestic.”

The irony in that statement is so thick, it’s hard to digest, in our view.

Liberals in San Francisco seem to adore foreign enemies — as they open the borders to them and provide sanctuary at every turn.

The resolution further calls on officials to “take every reasonable step to limit … entities who do business with the City and County of San Francisco from doing business with this domestic terrorist organization.”

It’s not enough to promote a ridiculous stunt.

#SanFrancisco [3] District 2 @SupStefani [4] wrote the scathing declaration reading in part, “The @NRA [5] spreads propaganda that misinforms and aims to deceive the public about the dangers of gun violence.” https://t.co/VYnnSIduHi [6]

The resolution goes on to state the NRA “spreads propaganda that misinforms and aims to deceive the public.”

‘Misinforms and aims to deceive”?

This is the same board of supervisors that  just weeks ago decided the best way to make criminals in its city more “palatable” is to rebrand them and give them kinder, gentler names. Guidelines voted on by the board declared that somebody formerly labeled a “convicted felon” would henceforth be referred to as a “formerly incarcerated person,” a “justice-involved” person or simply a “returning resident.”

Why? Because they want to “misinform” — and “aim to deceive” the public about the criminals infesting their city.

The NRA, the supervisor said, “knowingly puts guns into the hands of those who would harm and terrorize us.”

That aside, Catherine Stefani, the supervisor, wants law-abiding member of the NRA to know that she thinks they are terrorists. And that they absolutely scare the heck out of her.

The NRA, she said, “knowingly puts guns into the hands of those who would harm and terrorize us.”

Related: Another Front Opens Up in War on Second Amendment [8]

Meanwhile, the pro-Second Amendment group blasted the stunt and said Democrats were trying to “distract from the real problems facing San Francisco, such as rampant homelessness, drug abuse and skyrocketing petty crime.”

“The NRA will continue working to protect the constitutional rights of all freedom-loving Americans,” the NRA added in a statement.

The board’s actions are next-level lunacy, in our opinion.

A version of this piece originally appeared in The Political Insider; [9] this article is used by permission.

Read more at ThePoliticalInsider.com:
Duchess Of Sussex’s Father Said She Didn’t Pay For Her College, ‘I Did And I Have The Receipts’ [10]
Ted Cruz Schools Alyssa Milano With a Lesson On Our God-Given Right to Self Defense [11]
Report: Ilhan Omar’s Husband Seeking Divorce Following Her Alleged Affair With Political Consultant [12]