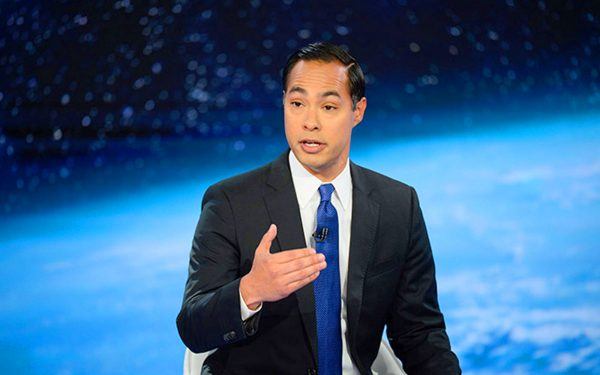 Instead, the former Obama Cabinet official — inside a restaurant and surrounded by some supporters during a California campaign stop — laughed and joked as he imagined a future in which Democrats win the White House in 2020 — and President Donald Trump and his family depart by helicopter from the grounds of 1600 Pennsylvania Avenue and are whisked away.

“On Jan. 20, 2121, I look forward to being there on the White House, when it’s customary for the incoming president to usher out the outgoing president,” he said in part.

“You know that scene on the White House lawn,” he continued. “The helicopter will be there in the distance waiting for [people] to say goodbye to Donald Trump and Melania Trump. [And] they’re getting ready to go off to New York, or to Mar-a-lago,” said Castro.

Someone in the crowd, speaking over Castro, then interjected, “Prison” — and the whole room laughed and smiled, including Castro.

Related: Some Dems Already Worry About Blowback from Impeachment Push [2]

“But I’m going to think about all those little kids, you know, that they separated,” he then put in, straining to connect the Trump administration to the illegal immigrant children brought to the U.S. southern border by their parents or by those posing as their parents in order to gain unlawful entry to the United States.

It’s highly unlikely Castro himself will be standing on the grounds of the White House next year or the year after, however — despite the cozy scenario he laid out for supporters.

It’s unlikely he’ll even be debating next month in Ohio in the fourth Democratic primary debate.

See the comments below on this topic:

"I don’t say this lightly: If I don’t make the next debate stage, it will be the end of my campaign," Julián Castro said in an email to supporters sent out by his campaign. https://t.co/S3le7mJyO7 [3]

In the latest Real Clear Politics average for Democratic candidates [5], Castro, 45, is polling far behind most of his rivals.

Mayor Pete Buttigieg of South Bend, Indiana, comes in fourth — and then, after him, five additional candidates all poll ahead of Castro.

“The real movement lately has been Warren solidifying herself in the early states, building a case that she is a potent challenger to Biden,” as Vox [6] and other outlets have noted. “In a couple of the most recent early-state polls, she has even pulled ahead of the vice president to first place.”

Watch the Castro scene for yourself, below.