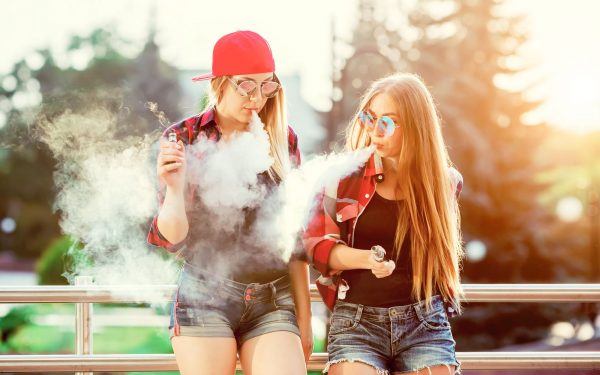 Michigan Gov. Gretchen Whitmer (D) today declared a public health emergency for those who use e-cigarettes [1] — and then moved to ban flavored vaping products.

Her ban takes effect immediately, but retailers and wholesalers have 30 days to fully comply with the prohibition.

The move targets all sweet flavors in products that the governor says attract young people to vaping. So there will no longer be wild cherry, cotton candy, caramel apple or a host of other favorite flavors of vaping liquid on the shelves.

Michigan residents will not be able to buy those products online either, at least not legally. It’s the first state in the nation to ban the sale of flavored e-cigarettes.

Whitmer’s decision also covers mint and menthol flavors. The only vaping flavors she allowed to remain, in fact, are tobacco-flavored liquids.

In announcing the decision, Whitmer proclaimed that her number-one priority is to keep kids in Michigan safe and added she must also protect the health of all citizens in Michigan.

The American Heart Association is among the groups applauding the governor’s move. The organization [2] says more than 3.6 million middle school and high school kids vaped last year and says Whitmer has taken an appropriate step to address what it calls an epidemic of vaping by young people.

Whitmer is calling this a public health emergency; the Associated Press last week reported [3] what might be the first death linked to vaping.

While a concern for sure, that is a long way from the more than 1,300 Americans who will die today alone because of smoking — or the 45 deaths daily in her own state.

The governor and others must have decided to ignore the true public health menace of cigarette smoking, which supporters of vaping say will surely increase soon with the new ban on flavored vaping. Cigarettes have a dire impact on Michigan and America overall. Vaping right now doesn’t make the common-sense list of public health concerns.

More than 16,200 people die in Michigan each year as a direct result of smoking cigarettes, according to the anti-smoking website TobaccoFreeKids.org [4]. So, yes, 45 people will die today from the impact of their own smoking. More will die as a result of second-hand smoke.

Related: Young Vaper on ‘The Ingraham Angle’: ‘Nothing Cooler Than Blowing a Fat Cloud’ [5]

The negative financial impact from smoking cigarettes in Michigan, as with everywhere else, is massive. TobaccoFreeKids.org cites daunting figures. The annual health care costs stemming directly from smoking in the Great Lakes State is $4.59 billion. Medicaid costs are $1.36 billion and lost productivity costs are pegged at $4.78 billion. In all, Michigan pays a steep price — over $10 billion — for smoking.

So what is the real public health emergency?

Vaping, though a concern, doesn’t begin to rise to the level of destruction of lives and families as seen with cigarette smoking.

If Gov. Whitmer is really concerned about the health of Michigan residents, why didn’t she go for the big prize and declare smoking a public health emergency first?

However, there is another component of the conversation that seems to be getting overlooked as well.

Tobacco is a tremendous source of revenue for governments, both large and small, all over the country. In Michigan alone, tobacco taxes bring in well over $900 million to state government coffers every single year.

Of the $919 million collected in tobacco taxes in fiscal year 2018-2019, according [6] to the Michigan House Fiscal Agency, schools got $344 million, Medicaid $330 million, the General Fund $181 million, and Healthy Michigan nearly $32 million. The rest went to other state agencies and funds.

One has to wonder: If Gov. Whitmer is really concerned about the health of Michigan residents, why didn’t she go for the big prize and declare smoking a public health emergency first?

Oh, and did we mention that marijuana is legal for medical or recreational use in the state — but that it also brings in plenty of money and doesn’t rise to the same level of concern as bubble gum-flavored vaping liquid?

This piece by Steve Gruber originally appeared in CarlHigbie.com [7] and is used by permission.

Read more at CarlHigbie.com:
Can There Ever Be Peace and Security in Afghanistan? [8]
‘Terrible, Terrible Judgment’ by Jim Comey and Team [9]
California New Law: Citizens Not Required to Help Police in Need [10]