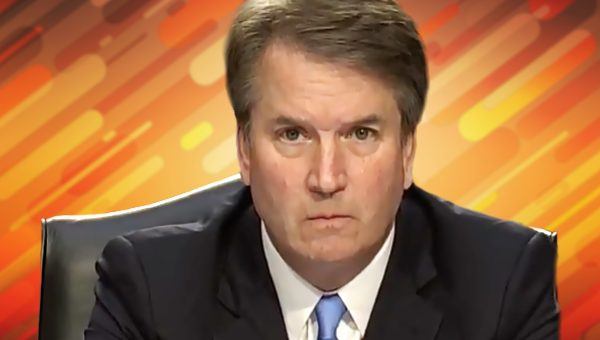 The revitalized, longshot push to get Kavanaugh removed from the high court comes as Democrats’ attempt to impeach President Trump have largely stalled. [3] Trump, for his part, suggested Kavanaugh should sue for defamation [4].

The Times piece by Robin Pogrebin and Kate Kelly, adapted from their forthcoming book, asserted that a Kavanaugh classmate, Clinton-connected [5] nonprofit CEO Max Stier, “saw Mr. Kavanaugh with his pants down at a different drunken dorm party, where friends pushed his penis into the hand of a female student.”

According to The Times, Stier “notified senators and the FBI about this account, but the FBI did not investigate and Mr. Stier has declined to discuss it publicly.”

But The Times’ article conspicuously did not mention that Pogrebin and Kelly’s book also found that the female student in question denied any knowledge of the alleged episode.

“The book notes, quietly, that the woman Max Stier named as having been supposedly victimized by Kavanaugh and friends denies any memory of the alleged event,” noted The Federalist’s Mollie Hemingway. “Seems, I don’t know, significant.”

“Omitting these facts from the @nytimes [6] story is one of worst cases of journalistic malpractice that I can recall,” wrote the National Review’s Washington correspondent, John McCormack on Twitter.

McCormack wrote separately [7]: “If Kavanaugh’s ‘friends pushed his penis,’ then isn’t it an allegation of wrongdoing against Kavanaugh’s ‘friends,’ not Kavanaugh himself? Surely even a modern liberal Yalie who’s been to one of those weird non-sexual ‘naked parties [8]‘ would recognize both the female student and Kavanaugh are both alleged victims in this alleged incident, barring an additional allegation that a college-aged Kavanaugh asked his ‘friends’ to ‘push his penis.'”

Impeaching Kavanaugh would require a majority vote in the Democratic-controlled House, and a highly unlikely two-thirds vote in the GOP-majority Senate would then be needed to remove him from the bench.

Omitting these facts from the @nytimes [9] story is one of worst cases of journalistic malpractice that I can recall.https://t.co/bSprnxgSuE [10]https://t.co/4IfuOR0D6M [11]

“I sat through those hearings,” Harris wrote on Twitter. “Brett Kavanaugh lied to the U.S. Senate and most importantly to the American people. He was put on the court through a sham process and his place on the court is an insult to the pursuit of truth and justice. He must be impeached.”

During the hearings, Harris strongly implied [1] that she knew Kavanaugh had improperly discussed special counsel Robert Mueller’s then-ongoing probe with a Trump-connected lawyer.

Harris provided no evidence for the bombshell insinuation, which went viral on social media and sent the hearing room into a stunned silence [13], even as she directly accused Kavanaugh of lying under oath.

I sat through those hearings. Brett Kavanaugh lied to the U.S. Senate and most importantly to the American people. He was put on the Court through a sham process and his place on the Court is an insult to the pursuit of truth and justice.

He must be impeached.

Castro echoed that sentiment and said Kavanaugh had committed perjury.

“It’s more clear than ever that Brett Kavanaugh lied under oath,” Castro wrote.

“He should be impeached,” he added. “And Congress should review the failure of the Department of Justice to properly investigate the matter.”

It’s more clear than ever that Brett Kavanaugh lied under oath. He should be impeached.

And Congress should review the failure of the Department of Justice to properly investigate the matter. https://t.co/Yg1eh0CkNl [15]

The Times’ piece also stated that well before Kavanaugh became a federal judge, “at least seven people” had heard about how Kavanaugh allegedly exposed himself to Deborah Ramirez at a party.

Ramirez had called classmates at Yale seeking corroboration for her story, and even told some of her classmates that she could not remember the culprit in the alleged episode — before changing her mind and publicly blaming Kavanaugh “after six days of carefully assessing her memories and consulting with her attorney,” the New Yorker reported [17] last year in a widely derided [18] piece.

The Judiciary Committee then led by Sen. Chuck Grassley (R-Iowa) said in an executive summary of its investigation that it contacted Ramirez’s counsel “seven times seeking evidence to support claims made in The New Yorker,” but that “Ms. Ramirez produced nothing in response and refused a committee request for an interview.”

Additionally, the FBI separately reached out to 11 people to corroborate the allegations by Ford and Ramirez, and ultimately spoke to 10 individuals and two eyewitnesses.

But the FBI found no corroboration.

Kavanaugh, predicted by Democrats during his confirmation process to be a hardline conservative, often sided with liberal justices during the Supreme Court’s last term.

The president, meanwhile, accused the media of trying to influence him. He went on to say that Kavanaugh should go on the offensive, taking on the media for false statements.

“Brett Kavanaugh should start suing people for libel, or the Justice Department should come to his rescue. The lies being told about him are unbelievable. False accusations without recrimination. When does it stop? They are trying to influence his opinions. Can’t let that happen!”

Brett Kavanaugh should start suing people for libel, or the Justice Department should come to his rescue. The lies being told about him are unbelievable. False Accusations without recrimination. When does it stop? They are trying to influence his opinions. Can’t let that happen!

Grassley sent several criminal referrals [20] to the Justice Department related to alleged lies submitted to Senate investigators during Kavanaugh’s confirmation process — which could be what the president meant when he wrote Sunday that the DOJ “should come to [Kavanuagh’s] rescue.”

One of those referrals was for now-disgraced attorney Michael Avenatti [21] and his client Julie Swetnick regarding a potential “conspiracy” to provide false statements to Congress and obstruct its investigation. Swetnick’s credibility cratered [22] as she changed her story about Kavanaugh’s purported gang-rape trains, and her ex-boyfriend went public to say she was known for “exaggerating everything.”

Swetnick and Ramirez were just two of several women who had accused Kavanaugh of sexual misconduct during his confirmation process. Christine Blasey Ford most notably testified that Kavanaugh attempted to sexually assault her at a party when they were teens, although no witnesses could corroborate her ever-changing story [23] — even her close friend, Leland Ingham Keyser [23], who Ford said had attended the party.

Ford’s attorney, Debra Katz [24], was quoted in a new book as saying that Ford was motivated to come forward in part by a desire to tag Kavanaugh’s reputation with an “asterisk” before he could start ruling on abortion-related cases. [25]

“In the aftermath of these hearings, I believe that Christine’s testimony brought about more good than the harm misogynist Republicans caused by allowing Kavanaugh on the court,” Katz said. “He will always have an asterisk next to his name. When he takes a scalpel to Roe v. Wade, we will know who he is, we know his character, and we know what motivates him, and that is important.

“It is important that we know, and that is part of what motivated Christine.”

Some claims that surfaced during Kavanaugh’s confirmation fell apart within days. For example, Sen. Sheldon Whitehouse (D-R.I.) received a call from an anonymous constituent who claimed that in 1985, two “heavily inebriated men” referred to as “Brett and Mark” had sexually assaulted a friend of hers on a boat.

The Twitter account belonging to the accuser apparently advocated for a military coup [26] against the Trump administration. The constituent recanted the sexual assault claim on the social media site days later.

Gregg Re is a lawyer and editor based in Los Angeles. Fox News’ Ronn Blitzer contributed to this Fox News [27] report, which is used by permission.