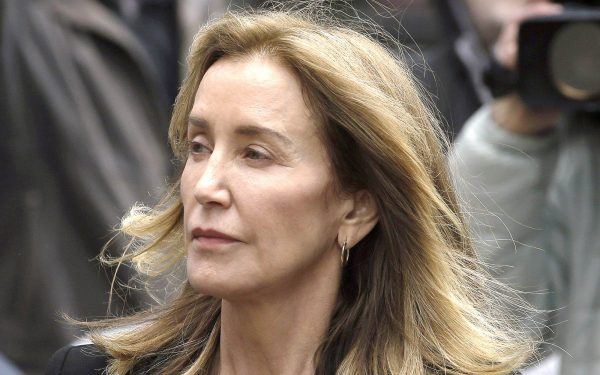 “Desperate Housewives” actress Felicity Huffman was in federal court on Friday for sentencing for her part in the college bribery case that rocked the nation. [1]

He threw in 250 hours of community service along with supervised release, but many don’t feel that’s enough.

The fact that Huffman seems to think there were no victims in this crime is enough for me to give her at least a month in jail.

The victims were the other students who didn’t get extra time for admissions exams and any corrected answers. H

Her own daughter was a victim, too — she wasn’t allowed the learning experience of succeeding or failing on her own.

The $15,000 Huffman spent on getting her daughter into school (money that went to correct the daughter’s answers after she’d taken an admissions exam) could have been used for tutors.

Also, if her daughter indeed qualified as special needs, the College Board makes special accommodations for students in that category — and she would have gotten extra time anyway.

“I am deeply ashamed of what I have done,” Huffman said tearfully in court ahead of her sentencing by U.S. District Judge Indira Talwani, as various outlets reported.

“I take full responsibility for my actions … I am prepared to accept whatever sentence you deem fit.”

Huffman was the first parent to be sentenced in the college admissions scam; her husband, actor William H. Macy, was present with her in court.

Prosecutors had previously recommended a one-month jail sentence for Huffman, plus a $20,000 fine and one year’s probation.

I’m personally disappointed that this scandal has not genuinely led to a broader discussion of how much easier it is for connected rich kids to get into elite colleges.

The elite schools show a great deal of preference for students who have graduated from similarly elite private high schools in major cities and fancy boarding schools.

They also show a tremendous preference for student-athletes — even those involved in obscure sports.

The parents of many of these students “paid” for them to play by hiring expensive coaches and sending them to special summer camps. While these practices are legal, they still rob more academically deserving students of the opportunity to attend an elite college.

I think these “celebrities” should be prosecuted to the fullest extent of the law. They shouldn’t be allowed to buy themselves out of anything; in other words, “You play, you pay.”

And they all knew they were doing wrong; there’s no need for them to say they didn’t.

Many of us applaud Huffman for coming forward and giving a heartfelt apology.

However, it’s time for the hard part. It’s time to pay for your actions.