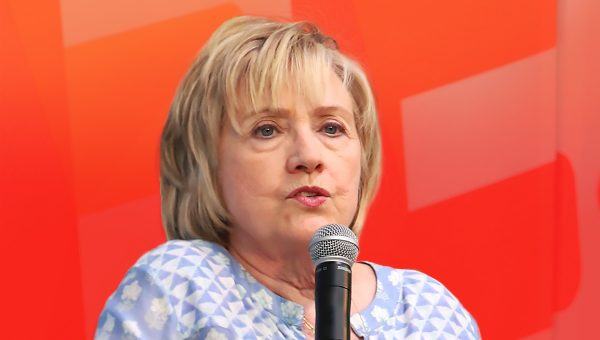 Former Democrat presidential candidate Hillary Clinton weighed in on the Democrats’ push for impeachment, offering support for it — and saying President Donald Trump “betrayed our country” and represents a “clear and present danger.”

The latter phrase refers to a free-speech test [2] established by the Supreme Court in which circumstances “will bring about the substantive evils that Congress has a right to prevent.”

Democrats, from the mainstream to the far-Left socialists, think Trump represents a “substantive evil.”

Clinton actually tweeted these comments after the release of the transcript on Wednesdady of a call between Ukraine President Volodymyr Zelensky and Trump.

That call was at the center of the Democrats’ impeachment inquiry — and one in which they allege Trump committed a quid pro quo.

Unfortunately for their cause, there is zero evidence of this.

But that didn’t stop Clinton, wife of the last president to actually be impeached, from hammering Trump and accusing him of betraying the country.

The president of the United States has betrayed our country.

That’s not a political statement—it’s a harsh reality, and we must act.

He is a clear and present danger to the things that keep us strong and free.

To be fair, self-awareness was never really Hillary Clinton’s strong suit, in our view.

On the subject of using the same foreign nation to investigate political opponents, the Democratic National Committee (DNC) worked with [4] government officials in Ukraine who sought to bolster Clinton and undermine President Trump.

The cozy Clinton relationship could “be traced back to late 2013,” according to Politico [5].

The embassy in Washington also admitted that an operative in the DNC sought dirt in 2016 on Trump.

Hillary Clinton admitted that her lawyer paid [7] for the dossier.

Who wants to break it to Hillary that Pence would become President and not her.

And when it comes to an actual impeachable offense such as obstruction of justice, both Bill and Hillary Clinton have that market cornered.

William Clinton was impeached because of it, and as Bill Maher [9] has pointed out, it’s actually Hillary Clinton who obstructed justice by “smashing up your phones and your hard drives” when her emails were being investigated.

Meanwhile, the transcript of the call between Trump and Zelensky shows zero evidence of a quid pro quo, zero mention of withholding military aid — and the Department of Justice, which received the whistleblower complaint that sent this entire thing into motion, declined to investigate [10].

They have nothing — and yet they want the American people to think Trump’s actions represent a “betrayal” of his country.

The only “clear and present danger” to this nation was prevented back in 2016, when the president sent Hillary Clinton packing after a stunning defeat at the polls.

That defeat has been so all-encompassing in Democrats’ minds for three years that they’ve done nothing but try to remove Trump from office to avenge her.

It is the Democrats who have betrayed this great country.