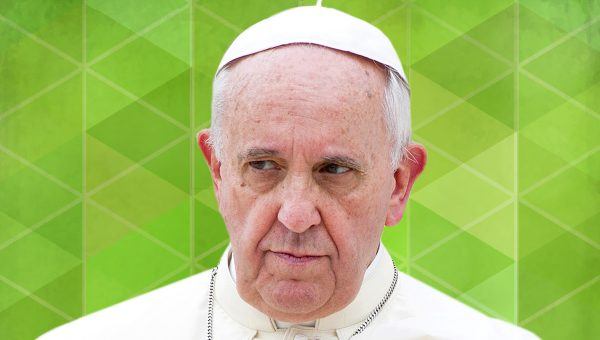 Pope Francis — the holy leader of the world’s Roman Catholics — says that “building walls means condemning yourself to death.”

Is that a biblical idea?

If so, this writer would like to know book, chapter, and verse.

Pope Francis discussed political and religious issues with a group of Jesuits from Mozambique [1], Portugal, and Zimbabwe in early September.

“The conversation occurred on September 5, but a transcript of the discussion was released” only recently, as Townhall.com [2] pointed out. “During the talk, Pope Francis warned of xenophobia and populism.”

“Xenophobia and aporophobia today are part of a populist mentality that leaves no sovereignty to the people. Xenophobia destroys the unity of a people, even that of the people of God,” the pope said, according to reports.

“And the people are all of us: those who were born in the same country, no matter whether they have their roots in another place or are of different ethnic groups.”

“Today we are tempted by a form of sterilized sociology, where you consider a country as if it were an operating theater, where everything is sterilized: my race, my family, my culture … as if there were the fear of dirtying it, staining it, infecting it,” he continued.

I was under the impression it’s a rejection of Jesus Christ (and His authority) that condemns people to death.

How does the pope explain the walls that surround the Vatican?

Maybe he should tear down those walls.

“There are those who want to stop this very important process of mingling cultures, which gives life to people,” he went on.

“Mixing makes you grow. It gives you new life. It develops racial mixing, change and gives originality … The mixing of identities is what we have experienced, for example, in Latin America. There we have everything: Spanish and Indian, the missionary and the conqueror, the Spanish lineage, people’s mixed heritage.”

“Building walls means condemning yourself to death. We can’t live asphyxiated by a culture as clean and pure as an operating theater, aseptic and not microbial.”

Out of curiosity, what do the “separation of church and state” people have to say about the pope’s authority to insult the United States like that in an obvious attempt to influence our national policies?

“Xenophobia destroys the unity of a people, even that of the people of God,” he said.

Once again: Pope Francis, tear down the walls that surround the Vatican.

Prove you’re at least as good a man as your word as our Democrats who genuinely embrace invasion (except inside the walls around their own homes, of course).

They do also enjoy invoking the authority of God, in their way, when it suits their political purposes.

“Xenophobia” does not destroy the unity of people.

Enemies within do — like the ones you’re trying to influence within our country with those pontificating remarks.

The Vatican has walls.

A version of this piece by Wayne Dupree [5] originally appeared in The Political Insider; [6] this article is used by permission.