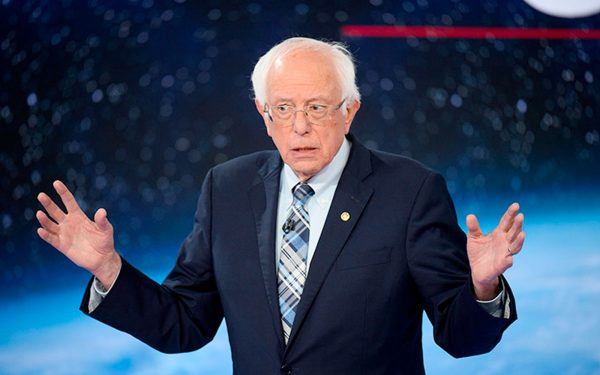 At a town hall event in New Hampshire this past Tuesday, Sen. Bernie Sanders (I-Vt.) had a “heckler” of sorts — a crying baby.

Unfortunately for the Vermont senator, he lost his cool — and it was not a good look for the 2020 Democratic presidential candidate [1].

Sanders was about to answer an audience member’s health care question when an infant started squealing, as babies are often known to do.

“Thank you very much, because it’s not easy getting up in front of a TV camera to talk about this,” Sanders said, beginning his response to the audience member. “Did I hear you correctly say you have to cut your pills in half?”

Just then, as the baby got louder, Sanders turned his head, looking over at the little one.

“If we could keep that down a little bit?” Sanders said, pointing in the crying baby’s direction.

Socialist Bernie Sanders snaps at infant.
Tells crying baby, “Can we keep *that* down a bit?” pic.twitter.com/bestpMpuTT [2]

Seriously, Senator? You told a little baby to pipe down?

Has he never been around kids?

Related: Joe Biden on the Hot Seat Again: Woman Rips Him for Grabbing Her Hand Without Permission [4]

Is this the same Bernie Sanders who likes to complain that Donald Trump doesn’t care about children?

Trump’s campaign staff wasted no time in mocking Sanders on Wednesday after the awkward exchange made the rounds online.

Sanders not feeling the Bern for kids in the audience yesterday… pic.twitter.com/GmXpyp96tB [5]

While liberal Democrats claim to look out for the best interests of everyone through their socialist programs, what they purport to care about on paper doesn’t always manifest itself in real life.

There are few things more essentially human than a mother with a crying baby.

The first thing a child does when it is born is cry.

Though the little guy or gal isn’t having much fun, crying babies are generally seen as a beautiful sign of life — unless you’re Sen. Sanders, that is, who was more annoyed than charmed.

In the grand scheme of the 2020 election, this is an overall humorous glitch, but perhaps the mother didn’t find it so funny.

Still, remember Sanders is the candidate who promises government will take care of us all.

Just don’t annoy him with your crying baby.