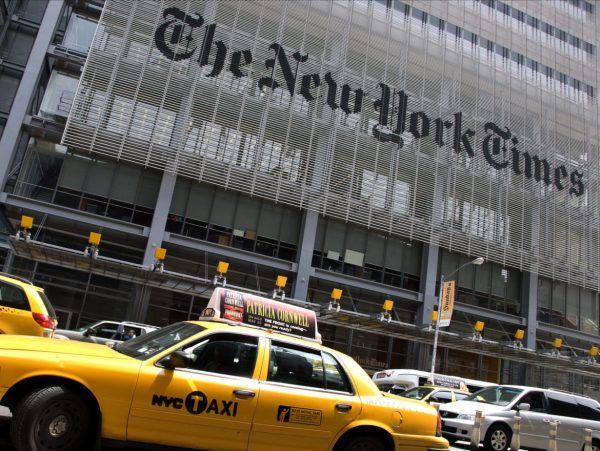 An article in The New York Times on Thursday revealed details about the whistleblower at the center of the current Capitol Hill frenzy that’s pushing Democrats to try to move toward impeaching President Donald Trump.

And now pushback against the Gray Lady is emerging after many people insist the publication went too far.

Calls to cancel subscriptions to The Times [1] “reached fever pitch” on Thursday evening, noted Fox News [2], after outrage emerged about the paper’s decision to identify the Trump whistleblower [3] as a CIA official.

In an article published earlier on Thursday [4], The Times let it be known the whistleblower at the center of the current D.C. showdown is a male CIA officer — one who had been detailed to the White House.

The “exclusive details” came out in a report based on corroborated accounts of three unnamed sources, not the whistleblower himself.

The Times also said lawyers for the whistleblower refused to confirm he worked for the CIA, as Fox News [2] also reported, and said that publishing information about him was “dangerous.” (Fox News pointed out it had not confirmed The Times’ report.)

Related: Anti-Trump Whistleblower May Be a CIA Officer — and May Have Had Help [2]

The whistleblower filed a complaint that alleged the White House covered up a July 25 phone call between President Trump and Ukrainian President Volodymyr Zelensky — in which, during the conversation, Trump asked the foreign leader to investigate former Vice President Joe Biden’s son, Hunter Biden.

Zelensky said he was not “pushed” in any way and described it as a normal phone conversation.

The Times’ identification of the whistleblower claims to be the most publicly known information about the individual.

So many people online became angry with the publication’s decision that many called it out online — and the item became a number-one trending topic, the hashtag #CancelNYT.

Executive editor Dean Baquet explained that the news outlet reported [5] “limited information” about this individual’s identity so that its readers could “make their own judgments about whether or not he is credible.”

Federal whistleblowers, however — as Axios [6] noted on Friday morning — are protected by law. “Readers and some in the national intelligence community expressed concern that revealing too much detail in media reports could put the officer’s life and reputation in danger and deter future whistleblowers.”

Fred Fleitz, a former CIA analyst, raised some important questions about the whistleblower beginning on Thursday. [7]

In comments shared Friday morning with LifeZette, Fleitz said, “The way this complaint was written suggested the author had a lot of help. I know from my work on the House Intel Committee staff that many whistleblowers go directly to the [intelligence] oversight committees.”

So “did this whistleblower first meet with House Intel committee members?” Fleitz asked. “It is therefore important that Congress find out where this complaint came from,” he added. “What did House and Senate intel committee Democratic members and staff know about it and when? Did they help orchestrate this complaint?”

“This document looks as if this leaker had outside help, possibly from congressional members or staff.”

Fleitz added he’s “troubled” by the complaint. He’s wondering “how an intelligence officer could file it over something a president said to a foreign leader. How could this be an intelligence matter?”

“I am very familiar with transcripts of presidential phone calls, since I edited and processed dozens of them when I worked for the NSC [National Security Council],” said Fleitz. “I also know a lot about intelligence whistleblowers from my time with the CIA.”

Related: Schiff Must Resign, Say Many, After His ‘Impeachment Stunt’ [8]

As he also wrote in an op-ed published on Thursday in The New York Post [9], “My suspicions grew this morning when I saw the declassified whistleblowing complaint [10]. It appears to be written by a law professor and includes legal references and detailed footnotes.”

“It also has an unusual legalistic reference on how this complaint should be classified.”

“From my experience, such an extremely polished whistleblowing complaint is unheard of,” Fleitz added. “This document looks as if this leaker had outside help, possibly from congressional members or staff.”

However, the “whistleblower,” as has been explained, never heard Trump’s call himself — and relied only on reports from another person (or several people).

So it was hearsay.

That scenario raises far more questions than Democratic members of Congress have been willing to admit — but one that Republicans have reminded them of and will, repeatedly.

It raises questions about who those “reporters” of Trump’s phone call might be, what their political leanings are (one can imagine), and how and under what circumstances they fed information to the “whistleblower.”

Members of Congress now head off to a two-week recess — with many heading for their districts.

Democrats have said they’ll be discussing their impeachment goals with voters during this period.

Did the @nytimes [11] really just dox the whistleblower who courageously risked life & career to reveal what they learned to the American people?

If so, it pains to say it's time to #CancelNYT [12] & Executive Editor Dean Baquet.

This is important information and the whistleblower is going to testify publicly and intends to do so. Why are all these cancel culture people attacking the times for posting very vague info on them? It’s not like they revealed their address and social security number. Chill out. https://t.co/5rcBixf8mT [15]