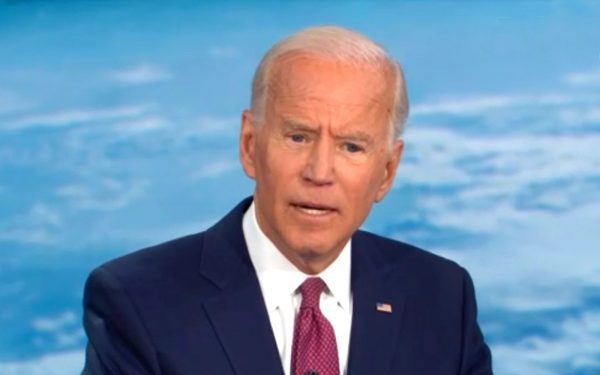 Former Vice President Joe Biden, who is under a great deal of scrutiny right now [1] for his failing “mental fitness,” appeared on Stephen Colbert’s late-night show — and dropped a doozy.

When asked if he’d appoint Barack Obama to the Supreme Court if he were elected president, Biden’s blunt response was, “Hell, yeah!”

I can’t think of a better reason not to vote for this 2020 candidate for the Democratic nomination [2].

In my view, however, people can probably rest easy — Biden won’t win. But even if he did, he claims Barack Obama would never accept the offer.

“Americans who think they’re done with Barack Obama may want to think again if Joe Biden wins in 2020,” wrote The American Mirror [3] about Biden’s comments. “The former vice president — and Obama’s top deputy — told ‘The Late Show’ host Stephen Colbert that he would nominate the former president to the Supreme Court if he wins the presidency next year.”

“When asked if he’s called Obama for advice, Biden said he talked to ‘Barack’ three or four weeks ago,” The Mirror also reported.

“Would you appoint him to the Supreme Court?” Colbert asked flatly.

“Hell yes,” he responded as the audience cheered.

“I don’t think he’d do it, but I…” Biden trailed off as Colbert made the pitch.

“When asked if he’s called Obama for advice, Biden said he talked to ‘Barack’ three or four weeks ago,” The Mirror also reported.

“He’s a constitutional professor at the University of Chicago,” Colbert said.

When asked if he’d spoken at all to Michelle Obama for advice, Biden replied, “Only to be my vice president, I…” he said, again trailing off as the crowd went wild, as The Mirror [3] also noted.

.@colbertlateshow [4] asks Biden if he would appoint Obama to the Supreme Court pic.twitter.com/aNTppoVSu3 [5]

A version of this piece originally appeared in WayneDupree.com; [7] this piece is used by permission.

Read more at WayneDupree.com:
‘Secret Plot’ by Blasey Ford’s Lawyer to ‘Destroy’ Kavanaugh Revealed in New Book [8]
Walmart Squirming and Back-Peddling as Pro-Gun Backlash Intensifies [9]
These Three Tried to Straighten Out the Pastor with Racist Sign [10]