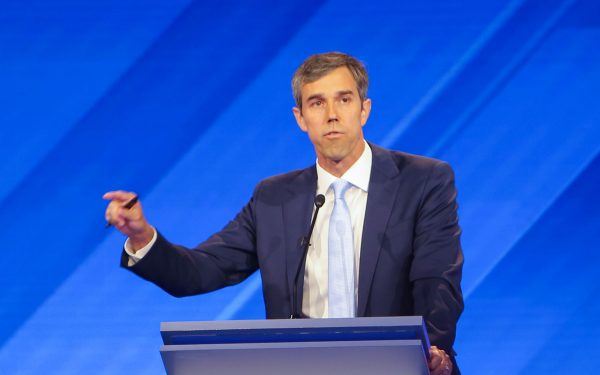 It is likely no coincidence at all that a “Beto Special” gun deal offered by one outfit — Arizona-based Alfa Dog Firearms — sold out on its select, $349.99-priced AR-15s in less than four hours on Friday.

“We’re trying to process the orders and work on getting more special deals for our good friend, gun-grabber Beto,” the company declared on its Facebook page this weekend.

Former Rep. Beto O’Rourke (D-Texas) [1] vowed this past week — in front of a gun control-friendly crowd at the Houston Democratic primary debate on Thursday night [2] — that he wants to confiscate legally owned rifles from Americans across the country, as he’s said earlier as well.

In the wake of the recent tragedies in both El Paso, Texas, and in Dayton, Ohio — as well as after other mass shootings in other locations across the nation — the struggling 2020 Democratic candidate insisted the federal government must seize certain semi-automatic rifles even from law-abiding citizens to prevent any further loss of life.

“The high-impact, high velocity round, when it hits your body, shreds everything inside of your body because it was designed to do that, so that you would bleed to death on the battlefield, not … able to get up,” O’Rourke said with passion on Thursday evening in Houston at Texas Southern University.

“When we see that [weapon] being used against children — and in Odessa, I met the mother of a 15-year-old girl who was shot by an AR-15, and that mother watched her bleed to death over the course of an hour because so many other people were shot by that AR-15 in Odessa and Midland, there weren’t enough ambulances to get to them in time,” O’Rourke also said.

Related: Expedited Death Penalty for Those Guilty of Mass Shootings? [3]

“Hell, yes, we’re going to take your AR-15, your AK-47. We’re not going to allow it to be used against fellow Americans anymore.”

The crowd at the Democratic debate went wild, naturally.

Last month’s #ElPasoShooting [4] took place in the home state of @BetoORourke [5]. On gun control, #Beto [6] said, “Hells yes! We are going to take your AR15, your AK47 (inaudible due to audience clapping) and I will say this, I am listening to the people of this country….” #DemsDebate [7] pic.twitter.com/63C2thXOKq [8]

He also said on Twitter on Saturday, “I was asked if it’s naive to advocate for a mandatory buyback of assault weapons.”

“It’s naive to maintain the status quo,” he added, “where nearly 40,000 Americans lose their lives to gun violence every year.”

I was asked if it’s naive to advocate for a mandatory buyback of assault weapons.

The answer is no. It’s naive to maintain the status quo, where nearly 40,000 Americans lose their lives to gun violence every year. https://t.co/Bahbnh5d2a [10]

Alpha Dog, on its Facebook page, says it is “Phoenix’s quickest up-and-coming gun store. Our impeccable customer service is second to none … We are a preferred dealer for Patriot Ordnance Factory and we are the only gun store with a POF-USA certified armorer. We offer Ultra-Sonic gun cleaning services.”

Ever since O’Rourke’s blatant gun-grab announcement on Thursday night, there’s been major pushback from across the conservative spectrum.

Here’s just a small representation of the reaction, information and outrage — share your thoughts.

Scary. @BetoORourke [5] threatens to take all our guns if he becomes President. Mandatory taking according to Beto. Someone send him a copy of the US Constitution and underline the #2ndAmendment [12] in yellow. #MAGA2020 [13]

And @BetoORourke [5] won’t raid businesses that hire illegals…or deport most criminal illegals…but he will jail Americans who don’t turn in their guns. https://t.co/QteiT2AlE2 [15]

Beto O’Rourke is the #1 salesman of AR-15s. Every gun manufacturer should be donating to his campaign.

“Sen. Christopher Coons (D-Del) on Friday warned Beto O'Rourke's pledge the gov will confiscate semiauto AR-15 rifles will become a rallying cry for gun rights groups for years…& haunt the D Party far into the future”
B/c It has a ring of truth#2A [19] @NRA [20] https://t.co/Ql6ZnIOoey [21]

And if you haven’t seen this clip, check it out here: