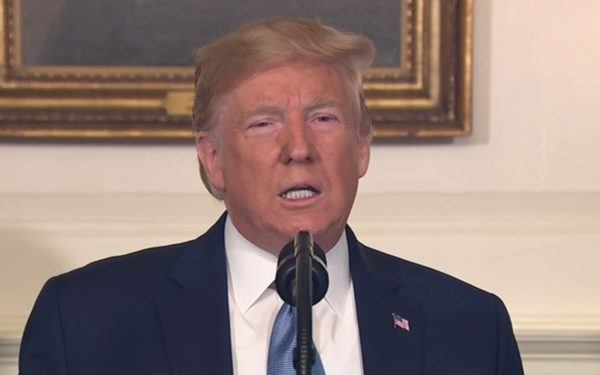 “We are going to apply as much pressure as humanly possible on both the president and on [Senate Majority Leader] Mitch McConnell to start with the two bills that are at his doorstep in the United States Senate around background checks [for gun purchases],” declared Rep. Tim Ryan (D-Ohio) [1] on Monday afternoon — adding that the background checks “have the support of about 70 to 80 percent of the American people.”

“There’s no reason why he can’t take those bills up and the president can’t sign them, and he’s been blocking them,” Ryan insisted. “This is something that we could get done. It has the support of the American people.”

Ryan, a 2020 Democrat primary candidate [1], was speaking to anchor Neil Cavuto on the Fox News program “Your World” on Monday afternoon during an interview in the wake of two mass shootings over the weekend — an interview that quickly became contentious.

Cavuto asked him about the issue of “reining in video game manufacturers and their increasingly violent content. Should that be part of it?” asked Cavuto.

“I have seen them, yes. I know exactly what they are … Too much of anything is not good for you, including those [games]. And I don’t think we should diminish it. But to try to inject that into a discussion — other kids in other countries play video games, and they play them at the rates that we play them here in the United States, but they don’t have these shootings like we saw in El Paso and in Dayton, because they don’t have access to the weapons that these people have.”

“And, look, your audience in particular, Neil,” added Ryan, “can be a real game-changer in this discussion here. This isn’t about Left or Right. This is about doing what’s right for the American people. If you look around this country now, people are scared to death to go anywhere. Yesterday — or two days ago — it was Walmart [in El Paso, where a shooting took place] … [Then] it’s this entertainment district in Dayton … This is happening everywhere, and it’s got to stop, Neil. We have got to stop this.”

Cavuto pointed out that many of Ryan’s Democrat colleagues “have blamed the president and his tone” for what happened — for the loss of life and the injuries, the terror, the killing. “But as I think you know, over multiple administrations, with various party loyalties and approaches, these shootings have continued,” noted Cavuto. “And I’m wondering if that is a constructive idea to all but say it’s the president inciting this type of behavior? Do you think that’s fair?”

Thank you Neil Cavuto for setting Tim Ryan straight on his pick and choose blame game political hypocrisy regarding these mass shootings. Something you won't get from other media.

Ryan replied, “I believe that the president is most certainly creating an environment here where people like this kid in El Paso drive 10 hours to go kill — quote unquote — ‘kill Mexicans,’ kill people of color. And when you look at what the president has done, Neil, around Charlottesville, saying both — good people on both sides, saying ‘go back to your country,’ cheer — people cheering at the rally, ‘Send her back,’ race-baiting on multiple occasions — that is creating an environment where maybe not the average person is going to do something stupid, but the lowest common denominator most certainly is,” he finished.

Cavuto called him out for that. “Congressman, is that really fair, when we had this guy who attacked Republicans on a baseball field on Capitol Hill? He [that shooter] was a big loyalist to Bernie Sanders, loved Bernie Sanders. That would be like blaming Bernie Sanders for that attack. Is that fair?”

“Look, I am saying he has created an environment in the United States that is absolutely toxic, and that maybe most people won’t do something,” said Ryan.

“But doesn’t intolerance work two ways?” said Cavuto. “If you’re saying the president is intolerant, Congressman, then you being intolerant of almost anything he says or does kind of fits the same bill, doesn’t it?”

Related: Why Didn’t This Candidate Put His Hand Over His Heart During the National Anthem? [4]

“Neil, come on,” said Ryan. “Like, let’s be honest here. You hear the president. You know what he says. He race-baits. This guy alienates people and tries to separate us based on color. And when he uses words like ‘invasion,’ and then this kid writes in his manifesto ‘invasion’ — when the president spends so much time … making [people] feel not included in the United States or they’re somehow not a part of this country for some reason, or ‘to go back’ to where they came from, and then thousands of people are cheering it at his rally, and he says nothing, you’re going to create an environment where the lowest common denominator in that society gets a gun — gets a gun and shoots people.”

“Sir, the fact of the matter is,” replied Cavuto, “[that] even [House Speaker Nancy Pelosi says, ‘He used racist words.’ She doesn’t think he’s a racist. You’re proclaiming he is.”

Essentially, Ryan was on a belief path — and he wasn’t letting it go.

“I don’t think there’s any question he [Trump] is,” replied the congressman. “And I don’t say that lightly. I’m not proud of it.”

“You’re blaming his language on these shootings,” said Cavuto. “That is going an extra mile, don’t you think?”

“Look, I am saying he has created an environment in the United States that is absolutely toxic, and that maybe most people won’t do something—”

“No, I’m not — I’m not — no, I’m not picking and choosing, Neil. I’m not picking and choosing, because President Obama and/or George Bush or anyone else was not creating an environment around the color of people’s skin. That’s what I’m talking about. And President Trump, when you look at his tweets, it’s always [about] Maxine Waters, or it’s LeBron James, or it’s some other black person, or person of color, or [Rep. Ilhan] Omar, or [Rep.] Ro Khanna—”

“Well, you’re seeing an uptick in crimes around the white nationalism, Neil,” said the Ohio Democrat. “Let’s have this honest discussion in the United States, so we can fix the problem.”

Cavuto had to remind the lawmaker of this: “As long as I can remember, Congressman, tragically, I have seen school shootings. Tragically, I have seen shootings in New Zealand and in Australia. You’re right, [there are] far more in this country. But the fact of the matter is, for many of you and your colleagues to jump and then cite the president — I’m no apologist for the president, as regular viewers of this show could attest — but, come on, that might be a leap too far, for you, too.”

“Neil, Neil, I’m not taking a leap. I’m telling it like it is. I’m telling you exactly how I see it … And I’m sorry it’s the case. And I’m sorry it may cut against somebody’s political beliefs, and they may agree with Trump’s political philosophy, which is fine, if there is one. It’s fine. I’m talking about him creating an environment of intolerance in the United States. Instead of out of many, one — he divides us. And you know it. And everybody else who pays a little bit of attention understands that this is his M.O. This is what he does. And like I said, it’s not everybody who goes to his rallies or everybody …”

“But you are talking about politics,” put in Ryan.

Said Cavuto, “You are talking about politics … You just did. I don’t have any interest in politics.”

“You just blamed them on the president of the United States, Congressman,” said Cavuto.

“Fair enough. I wish we had more time. I just think you have gone one step too far,” said Cavuto.

“Neil, this guy got in a car and drove 10 hours to slaughter people—”

Cavuto ended the conversation at that point. “It’s about tolerance,” Ryan was able to say before the interview concluded.

Watch the whole thing below: