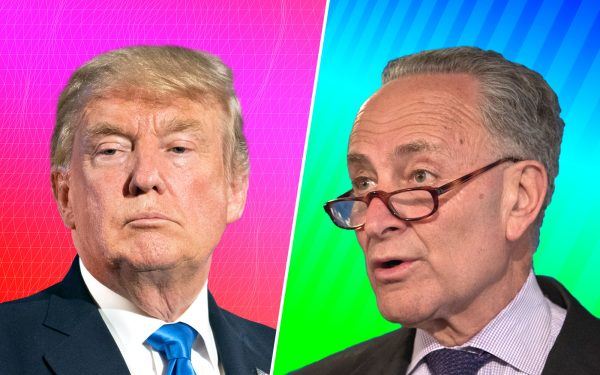 “I think meaningful background checks” are a positive thing, said President Donald Trump on Friday morning, speaking to reporters outside the White House.

He said he is far less worried about the politics of it; no one wants the wrong people to get their hands on the wrong items, he indicated.

And that’s the right thing to do.

Regarding such legislation to help prevent further tragedies in this country, he said he believes that “something really good” could be done on this issue.

Trump also said he’s spoken with lawmakers, including Senate Majority Leader Mitch McConnell (R-Ky.) about such potential legislation, and McConnell is “totally on board” with it, as CBS News [1] and other outlets reported.

Congress does not come back into session until well after Labor Day, on September 9.

He also said he had a “great talk” with Democratic congressional leaders Sen. Chuck Schumer (D-N.Y.) (shown above right) and House Speaker Nancy Pelosi (D-Calif.) on the issue.

But the president indicated he does not think lawmakers need to be called back early into session — since a package would be ready by the time they’re scheduled to return.

Congress does not come back into session until well after Labor Day, on September 9.

Trump talked to the media just before heading out to fundraising events in New York; he’ll then go to his New Jersey golf club for a working vacation.

The president spent time this week with survivors, families, first responders and politicians in the cities of Dayton, Ohio, and El Paso, Texas [2], following the tragedies there last weekend.

See the president’s tweets on this issue, which he shared before he spoke to the media this morning:

Serious discussions are taking place between House and Senate leadership on meaningful Background Checks. I have also been speaking to the NRA, and others, so that their very strong views can be fully represented and respected. Guns should not be placed in the hands of…..

….mentally ill or deranged people. I am the biggest Second Amendment person there is, but we all must work together for the good and safety of our Country. Common sense things can be done that are good for everyone!