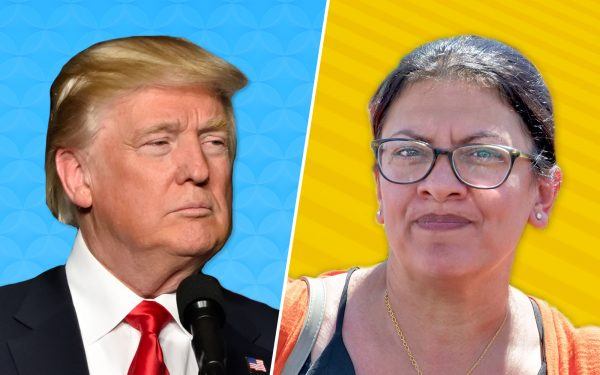 Muftia Tlaib, the grandmother of Rep. Rashida Tlaib (D-Mich.) (shown above right), responded to President Donald Trump’s recent tweet — in which he called her a  “real winner” after her granddaughter chose not to visit her in Israel.

Muftia allegedly replied to the president by saying,“Trump tells me I should be happy Rashida is not coming. May God ruin him.”

Related: Tlaib Declares She Won’t Travel to Israel to See Her Grandmother [1]

Trump tweeted about the matter this past Friday.

Here’s what he wrote: “Rep. Tlaib wrote a letter to Israeli officials desperately wanting to visit her grandmother. Permission was quickly granted, whereupon Tlaib obnoxiously turned the approval down, a complete setup.”

“The only real winner here is Tlaib’s grandmother,” Trump continued.

“She doesn’t have to see her now!”

Rep. Tlaib wrote a letter to Israeli officials desperately wanting to visit her grandmother. Permission was quickly granted, whereupon Tlaib obnoxiously turned the approval down, a complete setup. The only real winner here is Tlaib’s grandmother. She doesn’t have to see her now!

How could this woman’s mother expect God to ruin Trump?

I would think God is already pretty busy with trying to straighten out the Democrats and keep them in line.

(Four members of the so-called squad, after all, were elected last fall in the 2018 midterms.)

“Muftia Tlaib, the … grandmother of Rep. Rashida Tlaib (D-Mich.) had some strong words for President Trump after he claimed the elder Tlaib was a ‘winner’ because her granddaughter decided not to visit her in Israel,” as Reuters reported the other day.

“Trump tells me I should be happy Rashida is not coming,” the outlet reported her as saying. “May God ruin him.”

The grandmother apparently was hopeful Rep. Tlaib would still travel to see her after the recent controversy surrounding a planned visit.

“That statement came just a day after Trump appeared to troll the lawmaker by claiming her grandmother was better off without her visiting,” as Reuters also noted.

In my view, Tlaib’s attitudes as well as those of her family are just one piece of evidence that Israel will always need to protect itself from neighboring countries and defend itself against non-stop attempts to destroy it.

Meanwhile, as they continue spewing bile from the safety of their elected positions, Tlaib and the rest of the squad are a shameful embarrassment, as I see it.

Silencing me & treating me like a criminal is not what she wants for me. It would kill a piece of me. I have decided that visiting my grandmother under these oppressive conditions stands against everything I believe in–fighting against racism, oppression & injustice. https://t.co/z5t5j3qk4H [4]

Exclusive: Congresswoman @RashidaTlaib [6]’s family reacts to her decision to turn down a humanitarian visa offered by the Israeli government pic.twitter.com/NIyUbI4b15 [7]

Just what is the Democratic Party turning into, I must ask?

You can do a quick search on the internet and find a photograph of Barack H. Obama grinning next to Louis Farrakhan.

There is so much more.

The Jewish people need to take note of how the Dems have not done anything to discourage anti-Semitism promoted by various left-wing members of Congress.

Republicans stand by Israel and the Jewish people. Remember this when you vote next.

Read more at WayneDupree.com:
Report: French Modeling Agency Provided Approximately 1,000 Girls — 12 and Up [10]
Maher Blasts BDS Movement; I Can See Why They Don’t Get a Hero’s Welcome in Israel [11]
Watch: Politically Backed Antifa Tries to Stop Rally in Portland [12]