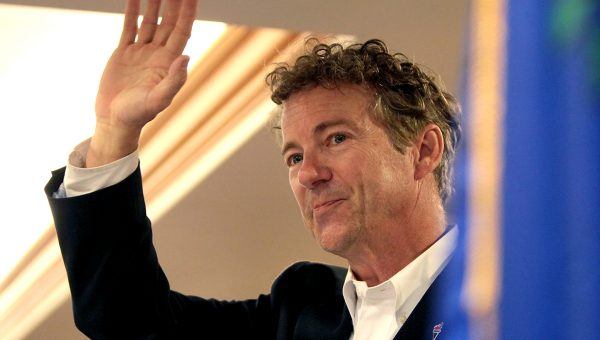 Speaking openly this morning on Fox News Channel’s “Fox & Friends” [1] about his long journey back to physical health, Sen. Rand Paul (R-Ky.) referenced his recent lung surgery — and its connection to a vicious physical attack on him nearly two years ago when a neighbor assaulted him [2] on the lawn of his home in Bowling Green, Kentucky.

The senator also mentioned the “left-wing mob” that appears to be active on social media — and how members of that mob have come after him verbally.

“For me, [I’m] trying to just overcome the pain initially and then get my breathing back to normal. I’m an avid exerciser,” he said this morning as he sat beside his wife, Kelly Paul. “I walk, I ride a bike every day, pretty much [every day] of the week, in Washington and at home. And so I’ve begun walking some.”

“I’m able to make it around the block. And I think it is just a matter of overcoming and getting beyond this,” he added, “and we’ve been trying to do it for almost two years now. I guess one of the disturbing things, though, is to see that there is still so much hatred out there.”

>The GOP senator added that once he “announced that I was having surgery,” there were just “thousands of people on Twitter swarming to wish … that I’d either died or that someone would assault me again … I am perplexed that this is somehow supposed to be a right-wing phenomenon, but I see thousands of people on Twitter, this left-wing mob, wishing that I were dead. And I’m like, who are these people?”

His wife, Kelly Paul, said that “we keep hoping to sort of put this behind us … We were just really grateful that [the doctors] think he’s going to be fine [now, after the surgery].”

"The narrative the left is bringing to us is 'everything is President Trump's fault'…and yet the man who attacked me…talked about doing violence to the President. So yeah, that's completely ignored, because the media wanted to develop a narrative," – @RandPaul [3] pic.twitter.com/kuOPOqphrO [4]

Thanks to friends and supporters for wishing me a speedy recovery after my surgery. While I originally had to cancel many of my events for August recess, my recovery is coming along better than expected, so I'll see many of you across Kentucky very soon!

The senator explained that although he had been making physical progress for a long time, he had also been suffering “worsening pulmonary symptoms. And then the X-rays and the CAT scan were showing that the damaged area of the lung was actually showing up in a larger fashion and growing. And the decision was made that the only way to get to the bottom of it, to see exactly what the problem was and to fix it, was to remove part of the lung.”

“Fortunately,” he said, “it was a chronic infection in the damaged part of the lung that wasn’t getting air and wasn’t getting good circulation. And so sometimes antibiotics just don’t work for something like that. But my hope is that it’s a cure now to have that part of the lung moved. And I’m about 1.5 weeks out and I’m getting a little stronger each day. I still feel like I’ve been in an auto wreck but I’m getting better.”

Related: Rand Paul Assaulted at His Home in Kentucky [2]

Of the hate that’s been directed his way, Paul noted, “I think this is the narrative that the Left is bringing to us. Everything is President [Donald] Trump’s fault, and so all the rhetoric — they say it’s all violence and the whole world is President Trump’s fault — and yet the man who attacked me was known on the internet. His social media postings were violent. He talked about doing violence to the president.”

“So yes, that is completely ignored because the media wanted to develop a narrative,” said Paul. “I mean, their whole narrative [is] that it was an altercation or a fight. There was no fight. I had my back turned with noise cancellation headphones on, and I was attacked and six of my ribs [were] broken before I saw the attacker.”

“In fact,” he added, “I never saw the attacker until after the attack was over. And people want to make it out [that] it was just this little dispute, but a lot of that came from the other side trying to get a lesser sentence. So they wanted to downplay what it was.”

“In reality, I think violence is complicated. And there are many reasons why people attack you, but ultimately I was very severely injured. I’m still suffering from it two years later.”

As LifeZette reported [2] about the assault on him two years ago this fall, the senator’s then-59-year-old neighbor, Rene Boucher, “tackled him from behind, forcing him to the ground and causing pain,” the complaint warrant obtained by ABC News affiliate WBKO said.

“I think violence is complicated. And there are many reasons why people attack you, but ultimately I was very severely injured. I’m still suffering from it.”

The warrant added that Paul suffered “small cuts to the nose and mouth area” and had difficulty breathing “due to a potential rib injury.”

“Sen. Paul was blindsided and the victim of an assault,” Kelsey Cooper, Paul’s spokeswoman, told The Hill in a statement at the time. “The assailant was arrested.”

As a number of outlets, including Vox [7], reported last year, Boucher pleaded guilty in March 2018 [8] to one count of assaulting a member of Congress, resulting in physical injury — which is a federal crime. Boucher, a retired physician, also admitted to the assault [9], explaining he’d “lost his temper” [10] over an “unsightly” pile of branches and brush that Paul had stacked near their shared property line.

The assault left Paul with six broken ribs and a bruised lung. He suffered several bouts of pneumonia — and now has had lung surgery.

Boucher was sentenced to a year of supervised release after his 30-day prison term and 100 hours of community service, noted WKU Public Radio [11].