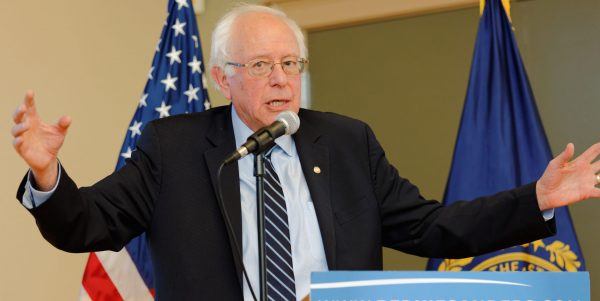 Sen. Bernie Sanders (I-Vt.) weighed in on Israeli officials’ decision to ban Reps. Rashida Tlaib (D-Mich.) and Ilhan Omar (D-Minn.) from visiting the country based on their vocal support for the anti-Israel boycott, divestment, and sanctions (BDS) movement.

Prime Minister Benjamin Netanyahu also claimed their agenda’s “sole objective is to strengthen the boycott against us and deny Israel’s legitimacy.”

Related: Trump Slams Tlaib for Declining Chance to See Her Grandmother in Israel [1]

MSNBC host Ali Velshi tried to fan the flames of this issue by asking Sanders for his view on Israel’s decision.

Velshi mentioned how “President [Donald] Trump ask[ed] the president [sic] of Israel, Benjamin Netanyahu, to do this, and Netanyahu oblig[ed].”

WATCH: Bernie Sanders on Israel’s decision to deny entrance to two elected U.S. officials: “If Israel doesn’t want members of the United States Congress to visit their country…maybe they can respectfully decline the billions of dollars that we give to Israel.” #inners [2] pic.twitter.com/m48djEhZjU [3]

Sanders said that if Israeli Prime Minister Benjamin Netanyahu did not want to allow Reps. Rashida Tlaib and Ilhan Omar to visit, “maybe he can respectfully decline the billions of dollars” the U.S. gives to Israel.

“But the idea that a member of the United States Congress cannot visit a nation, which, by the way, we support to the tune of billions and billions of dollars, is clearly an outrage.”

“And if Israel doesn’t want members of the United States Congress to visit their country, to get a firsthand look at what’s going on – and I’ve been there many, many times – but if he doesn’t want members to visit, maybe he can respectfully decline the billions of dollars that we supp — that we give to Israel.”

Sanders has made suggestions like this before, suggesting the leveraging of U.S. aid to Israel to achieve foreign policy outcomes.

In the past, Sanders — who is Jewish — has said he supports Israel’s right to exist in peace and security, yet he has repeatedly criticized Netanyahu and advocated for Palestinian rights.

Why, Bernie, should Israel give up foreign aid for barring two people who have demonstrated that they are anti-Israel and want a Palestinian state without Israel?

This opinion writer applauds Israel for denying entry to these two lawmakers who have 9 percent approval ratings in the U.S.A. — and now appear to want to bash Israel as they do the U.S. virtually every day.

A version of this piece originally appeared in WayneDupree.com [5]; this article is used by permission.