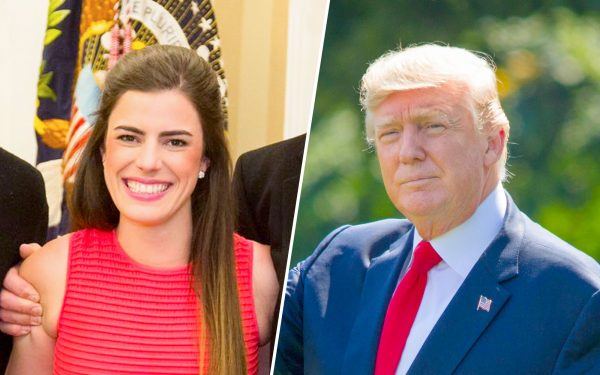 President Donald Trump issued a not-so-veiled threat to his former personal assistant, Madeleine Westerhout [1] (shown above left) — while also claiming that he “fully understood and forgave her” for her recent actions.

Trump also slammed other former aides on Twitter who have talked to the media about him in the past.

“While Madeleine Westerhout has a fully enforceable confidentiality agreement, she is a very good person and I don’t think there would ever be reason to use it,” Trump wrote on Twitter on Saturday.

She abruptly resigned her position this past Thursday [1] after reports came to light that she had been sharing inside details about the Trump family with members of the media.

“Yes, I am currently suing various people for violating their confidentiality agreements,” the president noted in a follow-up tweet, naming “disgusting and foul-mouthed Omarosa” Manigault Newman as one.

“Numerous others also!” he added.

While Madeleine Westerhout has a fully enforceable confidentiality agreement, she is a very good person and I don’t think there would ever be reason to use it. She called me yesterday to apologize, had a bad night. I fully understood and forgave her! I love Tiffany, doing great!

…Yes, I am currently suing various people for violating their confidentiality agreements. Disgusting and foul mouthed Omarosa is one. I gave her every break, despite the fact that she was despised by everyone, and she went for some cheap money from a book. Numerous others also!

The reference to his daughter, Tiffany, is interesting.

Westerhout apparently told members of the media that the president “couldn’t pick Tiffany out of a crowd” and that he was embarrassed by his daughter’s weight.

Tiffany Trump, 25, is the only daughter of Donald Trump and Marla Maples. She’s one of the president’s five children.

The president is spending the weekend in Camp David, as a number of outlets [4] have pointed out on Saturday.

He’s been constantly monitoring the conditions around Hurricane Dorian [5] as the storm heads for Florida and other parts of the east coast.

Share your thoughts below — and see these other tweets about the Westerhout issue:

President Trump on Madeleine Westerhout: "She called me. She was very upset. She was very down." https://t.co/rzNoWFKCew [10] pic.twitter.com/clc54nadle [11]