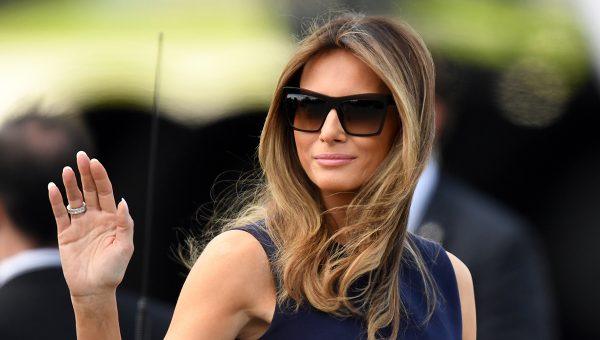 Late-night host Trevor Noah, who has been critical of the Trump administration in the past, this week decided to let it rip on first lady Melania Trump.

He did so while discussing her husband’s immigration policy.

Noah’s comments come after the Trump administration sought to remove green cards from immigrants [1] who use taxpayer-funded welfare.

Check out the below comments.

Melania Trump is the most popular member of the Trump family, according to polls. Noah said on his Wednesday night show, “Personally, I love her, too.”

He mentioned that they are both immigrants, stating, “Neither of us would be here if it weren’t for Donald Trump.”

He said that the first lady is rarely in the White House — and then he made a crude conjecture about the president, which we won’t repeat here.

Noah then noted that all of Trump’s moves on immigration seem to target the president’s own wife.

The late-night host also noted that Trump has promised to end chain migration — even though the policy allowed Melania’s Slovenian-born parents to obtain U.S. citizenship.

Noah’s rant spurred #DeportMelania to trend on Twitter. Thousands of users then launched brutal verbal attacks on the first lady.

#dontdeportmelania [5] no, wait… she stands by while her husband puts kids in cages in spaces so small children are unable to lay down to sleep. Yes please do #deportmelania [6] https://t.co/GEyfBPYzfH [7]

The United States should keep to their standard and #deportmelania [6].

@FLOTUS [9] is complicit in her husband’s crimes, the Marie Antoinette of America.

She does absolutely nothing for this nation other than helping to drag it through the mud. Get her out of here!

Isn’t it amazing what money can buy you? She doesn’t belong here, if others do not as well. She should not be an exception. Period. If Trump is going to deport “illegals” that means the @FLOTUS [9] goes too. #DeportMelania [12] https://t.co/CevLujj6jK [13]

If you are going to #deportmelania [6], did you keep your packaging she arrived in? #ThursdayThoughts [15] pic.twitter.com/Q8FihowqnZ [16]

Many Trump supporters have argued that such a verbal attack and such antics never would have been tolerated against former first lady Michelle Obama.

This piece originally appeared in the Objectivist [18] and is used by permission.