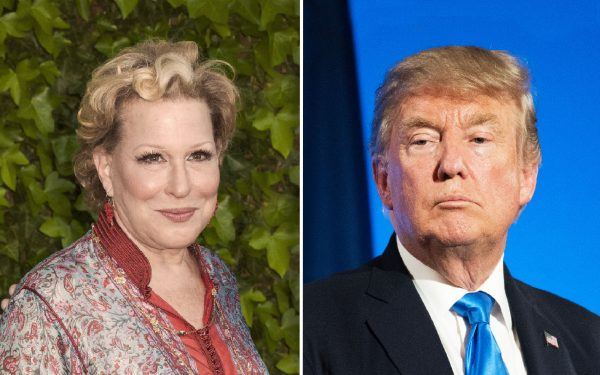 Bette Midler is an aging actress who has changed her job profile as a Hollywood used-to-be: She now regularly attacks President Donald Trump [1] so that he can respond and revive her career, in my opinion.

After last week’s tragedies in El Paso and Dayton, Democrats have been blaming the president non-stop.

Related: Victim in El Paso Was ‘Very Supportive of Trump’ [2]

That’s because it’s a lot easier for them to do that than blaming the real culprit: their own liberal policies.

So what did Midler do? She jumped on her Twitter account and wrote to her 1.7 million followers — in all caps — that Trump is inciting evil individuals to do his “dirty work.”

She tweeted, in part: “HE INCITED OTHERS TO DO HIS DIRTY WORK FOR HIM, AS HE HAS DONE HIS WHOLE LIFE.”

Aside from the problems with her actual message, using all caps in online speech is bad etiquette, as we know. It suggests yelling at other people.

It’s clear to this writer that Midler has never had an original thought in her life. She stole that bit about doing “dirty work for him.” That’s something we’ve said about former President Barack Obama and failed Democratic candidate Hillary Clinton: They’ve used Antifa to do their dirty work for them to keep their own hands clean.

Midler should speak out about the child sex abuse that goes on in the media and entertainment worlds. She should concern herself with those victims.

The victims’ voices must be heard.

Related: President ‘Tried to Heal the Pain Everyone Is Going Through’ [3]

Or maybe she should commission a study about how people on the Left engage in “mass lying.”

We have to get to the bottom of this “mass lying phenomenon.” So much is at stake for our country’s future. Midler is dealing with serious problems; she needs help!

“These sinister ideologies must be defeated. Hate has no place in America,” said Trump.

By the way, President Trump already denounced what went on in El Paso, Texas, and Dayton, Ohio, as well as other places.

ABC News captured a segment of Trump’s speech that addressed just that: “In one voice, our nation must condemn racism, bigotry, and white supremacy. These sinister ideologies must be defeated. Hate has no place in America.”

But you don’t hear too many on the Left reciting that line.

A version of this piece originally appeared in WayneDupree.com [4] and is used by permission.

Read more at WayneDupree.com:
Watch: Shep Smith Distraught Over 600 People Arrested at Chicken Plant [5]
Rep. Elijah Cummings: God Has Called Me to This Moment [6]
Scaramucci Calls Out Trump’s Behavior During His Visits to El Paso and Dayton — on MSNBC [7]